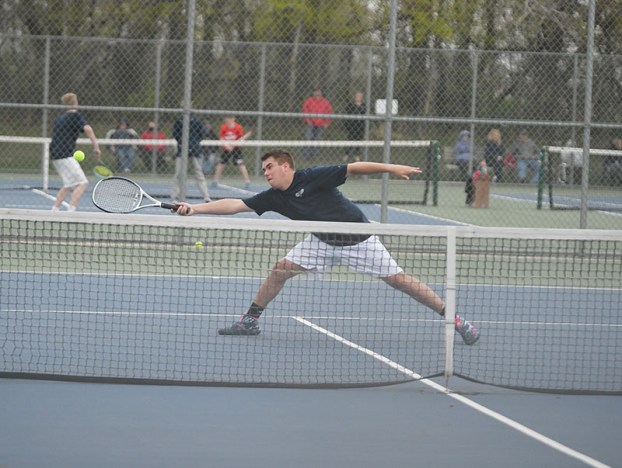 The Tigers came the closest they’ve been all season to a team win, with doubles sweeping the competition. However, all four singles matches lost, giving the victory to Austin 4-3.

In the No. 1 doubles slot, the team of senior Dylan Carlson and junior Jack Doppelhammer earned a hard fought three-set win over Austin’s Eric Stencel and Owen Carroll, 4-6, 6-3, 6-3. The win was Doppelhammer’s first of the season.

In the No. 2 doubles match, the duo of junior Alex Olson and sophomore William Isaacson got a win over Michael Garry and Macros Castro, dominating after dropping the first set, 6-7, 6-1, 6-3. The win was Isaacson’s first of the season.

In the final doubles match, junior Gurang Dual and sophomore Cannon Kermes beat Austin’s Quinton Grimley and Timothy Perez in two sets, 6-2, 6-4. The win was Dual’s first of the season.

It was in singles action where the Tigers started to come apart. Senior Caleb Hanson came the closest to a win. Hanson beat Austin’s Cole Hebrink in the first set of their match at the No. 2 spot, but lost the remaining two 4-6, 6-1, 6-4.

Albert Lea falls to 0-9 as a team and will be back on the court Thursday when they travel to Mankato East for the first meet of their four-match road trip. They will be back at home May 18 when they take on Owatonna in the final meet of the regular season.