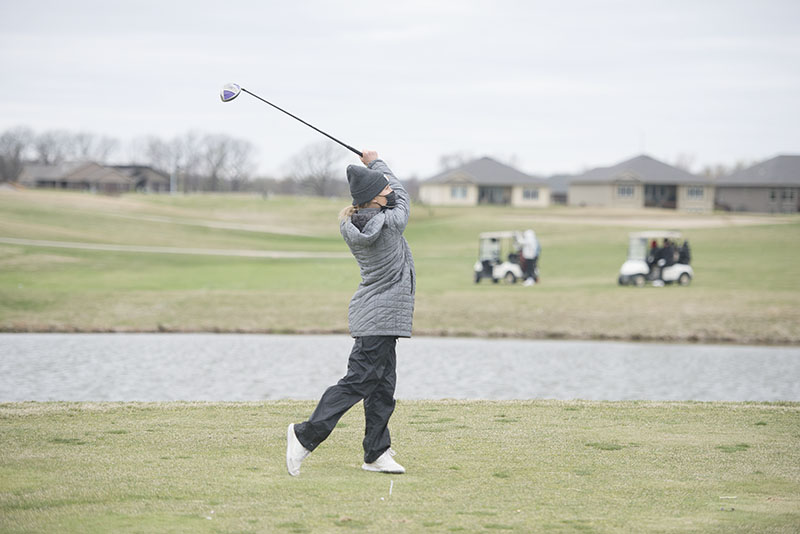 Albert Lea sophomore Gracie Palmer tees off from hole No. 1 at Wedgewood Cove Monday afternoon in a meet against Austin. Palmer carded a 113 in the Tigers' victory over the Packers. Tyler Julson/Albert Lea Tribune

Despite the cold and windy weather, the young Tigers team had no problem defeating the Packers by more than 100 strokes, 393-529.

Leading the way for the Tigers was sophomore Whitney Mullenbach, carding a score of 83 on the par-72 course. Mullenbach pared five of the final nine holes on the course to take home the medalist position.

Not far behind was fellow sophomore Alyssa Jensen with a score of 89. Jensen was the only player on the course to record a birdie, finishing with a four on the par-five fourth hole, as well as a three on the par-four fifth hole. 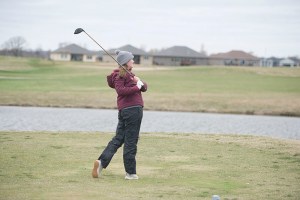 Freshman Ashlyn Breven watches her drive Monday afternoon in a meet against Austin. The Tigers move to 1-0 after their 393-529 victory over the Packers. Tyler Julson/Albert Lea Tribune

Rounding out the team scoring for the Tigers was Jessica Vogt and Gracie Palmer. Vogt carded a round of 108, while Palmer came back to the clubhouse with a round of 113.

Also playing for Albert Lea, but missing out on the top-four, were Ashlyn Breven and Addison Herr. Breven scored a 116, and Herr scored a 133.

“393 is a good score for early season and in those conditions,” Riebe said. “I also think the slow play today affected our ability to score.  I know we have a lot better scores in this team. I am looking forward to playing in better conditions, getting some more time to fine tune some swings, and really see what this team is capable of.”

The Tigers move to 1-0 to start the season. They will be back in action Monday when they host the Falcons of Faribault as well as the Winhawks of Winona in a triangular meet, this time at Green Lea Golf Course.