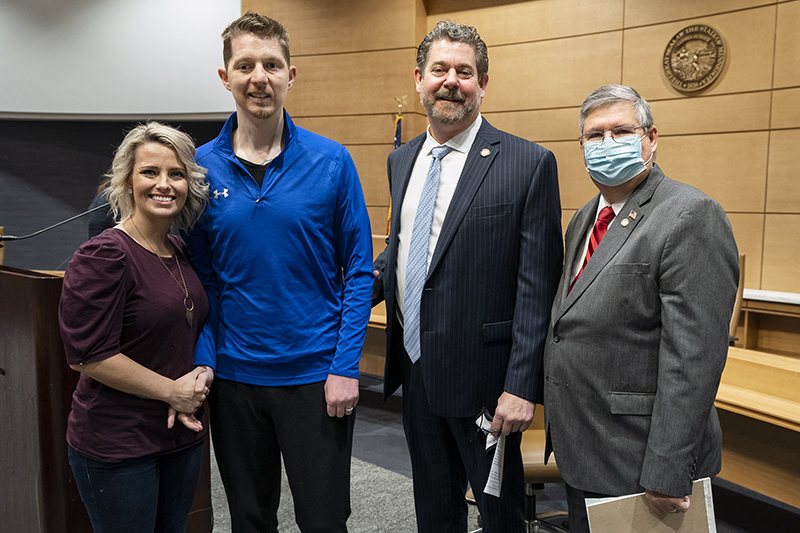 Sen. John Jasinski stands with Megan and Arik Matson and Rep. John Petersburg in April while lobbying for the passage of a bill that would increase the penalty for individuals who are convicted of assault that causes great bodily harm to a police officer, judge, prosecutor or correctional officer. Provided

The Senate’s Finance Committee on Friday approved a bill that strengthens state criminal penalties for individuals who are convicted of assault that causes great bodily harm to a police officer, judge, prosecutor or correctional officer.

The legislation, chief authored by Sen. John Jasinski, R-Faribault, increases the maximum sentence from 20 to 25 years for great bodily harm, and if the assault causes great bodily harm and was committed with deadly force or using a dangerous weapon, from 20 to 30 years.

The bill is in honor of Officer Arik Matson, a Waseca police officer who was nearly killed in the line of duty last January.

“We are extremely grateful for Minnesota’s police officers who put their lives on the line, in the hardest of circumstances, to keep us safe,” Jasinski said in a news release. “This is a common sense, pro-public safety measure that honors Officer Matson’s service — and the service of every law enforcement officer — by showing the community’s strong support for police and the tough work they do every day.”

The bill now awaits a vote of the full Senate.