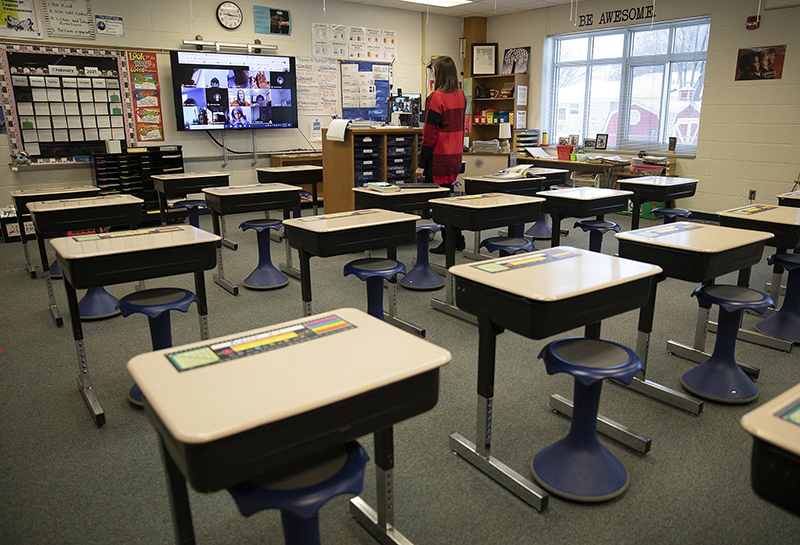 Fourth-grade teacher Kelly Brant stands in her classroom as she talks to her students who were learning remotely Jan. 19 at Park Brook Elementary School in Brooklyn Park. Christine T. Nguyen/MPR News

The junior at Patrick Henry High School in Minneapolis is taking most of his courses through a post-secondary education options program at Minneapolis Community and Technical College. He’s keeping up with his schedule, getting good grades and relying on a system of sticky notes to stay on top of assignments.

But it has been a long, hard and lonely year stuck at home in front of his computer. Hadley, 17, misses seeing his friends. He misses being a part of school events. He misses the structure and accountability of going to class in person.

Still, he’s decided to remain in virtual learning for the rest of the year.

“If I was to go back to in-person school I would only be there for like an hour out of the whole day and we have to wear masks, stay 6 feet apart. That’s going to be torture,” Hadley said. “So, I’d rather just finish out the two months we have online like we’ve been doing it — like, what’s two months going to do? It’s not going to hurt anybody.”

Still more than a year away from high school graduation, Hadley wants to go into health care like his mom. He’s been keeping up with his schoolwork at home, and to him, it doesn’t make sense to disrupt the schedule he’s already worked out.

Nationwide, there are similar trends. Close to 80 percent of Asian, 64 percent of Black and Hispanic and 41 percent of Native American eighth grade students were in distance learning scenarios in February and March. That’s compared to only 32 percent of white students, according to a U.S. Department of Education survey.

Not every district in Minnesota is keeping track of the demographics of which students are choosing in-person versus distance learning options. But of those that are, many show students of color disproportionately choosing to stay home.

At Mounds View Public Schools, where all grades now have the option to attend some form of in person learning, a full 60 percent of Asian students have chosen to remain in distance learning.

Pang Xiong, a Hmong American parent of six, is among those who’ve chosen to keep their kids home from Mounds View classes.

“It was hard to adjust to openings and closings,” Xiong said. “If the school needed to quarantine and shut down, that was just really hard for us to manage in terms of schedule. Like, if we’re working we would have to readjust all of our schedule to the kids.”

Xiong is not a big fan of distance learning. The last year has been overwhelming, trying to navigate the pandemic, a career change, parenting, new technology and keeping six kids on top of their education.

But for her, managing things at home was better than worrying about someone in her family getting infected with the virus. Her oldest, a freshman in college, was diagnosed with COVID-19 in December. He had to move back home and quarantine in a basement room for a few weeks. Xiong said it was terrifying not knowing if he’d get a bad case of the virus or spread it to other family members — like the elderly in-laws she was helping care for.

Plus, she has worried about the rise in anti-Asian hate incidents. For her, distance learning for now means not having to worry as much about how her kids might be treated if they’re sent back to class.

“When I started hearing stories about kids getting bullied or called names by other kids or adults and the violence that has been happening, I was really afraid for my kids. I don’t know how other people will treat them because of who they are and how they look,” Xiong said.

Not every district is seeing similar patterns in the choices students are making. At Austin Public Schools in southern Minnesota, family choices have shifted over the course of the year. In September, students of color made up just over 60 percent of those choosing to learn from home, most of them Hispanic. That’s despite the fact that only 54 percent of the district’s students population is non-white. Now the numbers are different — just over 53 percent of those choosing to stay home are students of color.

But at Park Center High School in Brooklyn Center, Minn., Hmong language teacher Pang Yang says many of her students are concerned about returning to in-person learning. The district has even seen some students who were in hybrid scenarios switch to distance instead of going to full in-person classes. Up to 10 percent of hybrid students made that decision in the district’s most diverse school, but only 4 percent in the district’s least diverse school.

Yang knows some of her students, all of whom are in the district’s virtual academy, are worried about anti-Asian racism. Others are concerned about being exposed to the virus.

“We’re worried about infecting our families because we know that Hmong families, we have large family sizes. I know of multiple families where they’ve lost so many family members to COVID. And so I think that was the biggest fear at the beginning,” Yang said. “Then, I think (it’s) the trust with the school. The parents don’t know exactly what the school is doing to make sure their student is protected.”