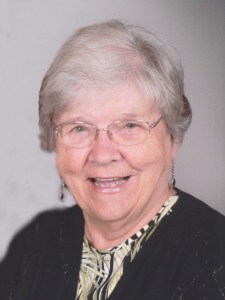 A funeral service will be held at 2:00 PM on Friday, May 7, 2021 at Emmons Lutheran Church, 490 Pearl Street in Emmons, MN, with Pastor Ryan Henkel officiating. Burial will be in Oaklawn Cemetery, rural Emmons.

Visitation for Barb will be one hour prior to the service at the church on Friday.

Barbara’s service will be recorded and posted on the Schott Funeral Home’s website. Go to www.schottfuneralhomes.com and click on Barbara’s picture. From here, click on “tribute wall” to find the link.

Barbara Kay (Bergo) Paulson was born on December 6, 1937 in Northwood, Iowa to parents Orvin and Mildred (Holstad) Bergo. She attended and graduated from Northwood High School in 1956, and soon after, began a job in Minneapolis.

Barb was married to Carl Paulson while he was on military leave. The ceremony took place on February 16, 1958 at Sion Lutheran Church, rural Lake Mills. Following their wedding, Carl went back to the service, and Barb continued working in Minneapolis. Shortly after, when Carl received his honorable discharge, the couple moved to the Silver Lake area. They were blessed with two children: Scott and Beth. And in 1963, the family moved to Emmons, where they remained ever since. Barb worked in administration at Fleetguard Industries in Lake Mills, retiring in the mid-1990’s.

Barb enjoyed many hobbies through her lifetime including handiwork such as sewing, crafting and quilting; camping; putting puzzles together; traveling to Mission, Texas for over 20 winters; and cooking for her family and friends. Cooking was one of the ways Barb showed her love to others, and she took great pride in it. She volunteered with circle and ladies’ aide at Emmons Lutheran Church and was a member of the Emmons Civic Club.

She was so proud of her family and cherished the time she spent with her grandchildren and great-grandchildren.

She was preceded in death by her parents; a son-in-law David Benson; and a brother Dennis Bergo.