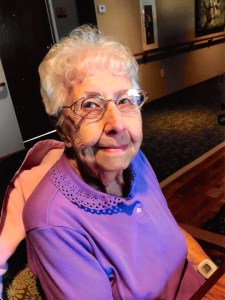 Marietta was born on Sept. 19, 1927 to Chris and Sophie Geiger (Olson) of Taopi on the farm. She moved to Austin with her family when she was 6 months old. She attended elementary and Austin High school. During high school and after she worked at Hormel office. She married Roger Neitzel on Jan. 6, 1948 in Austin. Shortly after their marriage, they moved to Albert Lea. She did daycare at her home until her children grew up. Later she travelled with her husband in the truck. Marietta belonged to React for many years and worked in many activities such as bike a thon, safety breaks and rendezvous.

She was a life member of VFW-Austin. Marietta enjoyed camping with her families and going to the grandchildren games such as hockey, dance, basketball, and soccer. She watched the Vikings and Twins games and enjoyed playing bingo.

Marietta is preceded in death by her husband, Roger; son, Gene; sister, Amanda Geiger and son-in-law, Rod James; parents, Christopher and Sophie Geiger; in laws, George and Eloise and Neitzel.