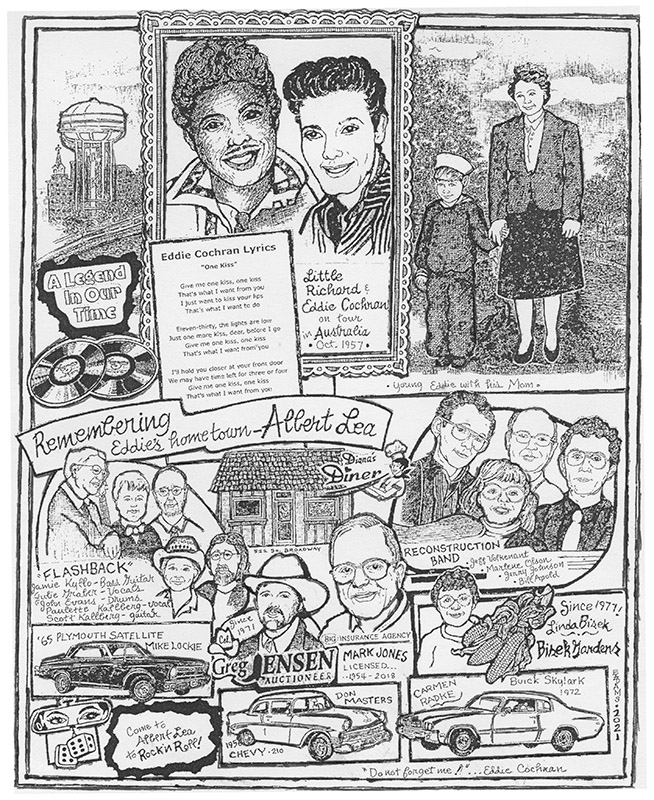 The 28th Eddie Cochran print has been created to remember Eddie Cochran. Cochran always signed his autographs, “Don’t forget me!” and his hometown doesn’t want this talented performer to be forgotten, according to a press release.

The artist is Eloise Adams.

At the top of the print is Cochran shown with his friend, “Little Richard,” both on tour in October 1957 in Australia.

To the right is Cochran’s mom and him when he was younger walking in an Albert Lea park.

Also shown are the lyrics to one of his songs, “One Kiss.”

The bottom half shows some of Albert Lea’s history.

The five-member Flashback band is depicted: Jamie Kyllo on bass guitar, Julie Graber on vocals, John Evans on drums and Paulette and Scott Kallberg on vocals and guitar.

Diana’s Diner is also shown next to the depot. It was a place where train travelers could get a snack or a meal. Diana Newman bought the cafe in 2007 and serves “great egg sandwiches,” according to the release.

Since 1971, Col. Greg Jenson has been in real estate in Albert Lea. He also has been a popular auctioneer in the Albert Lea area.

Mark Jones of the Big Insurance Agency was a licensed agent from 1954 to 2018. He followed his father, Albert W., and grandfather Mark M. in the insurance business. When the Wedge-Jones building was completed in 1903, the business was located there.

Linda Bisek of Bisek Gardens has been in the corn business since 1977. She produces and sells ornamental popcorn, sorghum and corn seeds to seed companies all over the United States, as well as producing exceptional sweet corn.

On the bottom are three cars that will appear in the car show.

There is a ‘65 Plymouth Satellite owned by Mike Lockie.

Carmen Radke’s 1972 Buick Skylark also will be shown at the car show.

The prints are numbered and signed. Some are hand painted.

The prints can be seen at Adams Originals store in downtown Albert Lea.