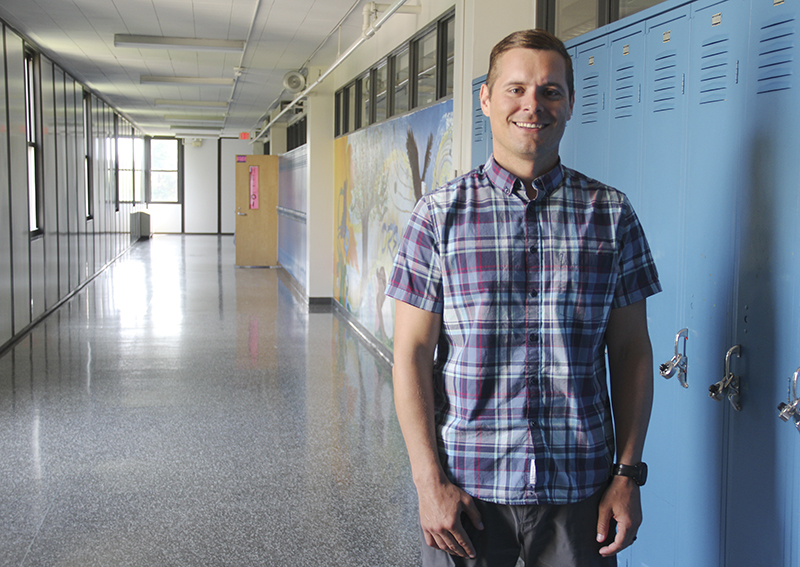 Tyler Johnson is the new principal at Southwest Middle School. He has been with Albert Lea Area Schools since 2019 as dean of students. Sarah Stultz/Albert Lea Tribune

Southwest principal has background in science

Southwest Middle School will have a new leader at the helm this fall when teachers and students return to the classroom.

Tyler Johnson had worked as dean of students at Albert Lea High School since 2019 and prior to that taught middle school science in both Adrian and Triton school districts and has coached several sports.

Johnson said when the position opened up after former Southwest Principal Chris Dibble was selected as the new Albert Lea High School principal, he jumped at the opportunity to apply for the job and was ultimately selected. Dibble replaced Mark Grossklaus, who accepted a new position with Centennial Public Schools.

“In all reality, middle-school age students are my favorite age of students to work with because of the experience I have,” Johnson said. “They’re fun at that age.”

Johnson said he started in the education field after being inspired by his high school science teacher. Initially after high school, he wanted to become a nurse, but after a tour of a hospital, he said he quickly found out it wasn’t the job for him. Instead, he pursued science education, obtaining a Bachelor of Science in life science education from St. Cloud State University.

“The impact he had on me, I thought that would be awesome if I could have that kind of an impact on future students,” he said.

After teaching for nine years, he went back to school and earned his administration license through St. Mary’s University and then accepted the dean position in Albert Lea.

He said so far in his new position he has been working on new staff hires, developing the master schedule, adjusting to the building and getting things ready for the start of the new school year. Coming back from the pandemic, he anticipates many questions from families and staff. He noted he is grateful to be able to ask questions of Dibble, if necessary.

He said his biggest goal will be getting everyone back into the routine of everyday school and being a support system for students and staff.

“First and foremost, student well-being is number one — making sure they have access to classes, resources, people that they know that care about them,” he said.

He encouraged parents to contact him if they had questions about their student.

Johnson and his wife, Liz, an Albert Lea High School graduate, live in Albert Lea and enjoy outdoor activities. According to the Albert Lea Area Schools website, they are avid Iowa State fans and can be found cheering on the Cyclones at Jack Trice Stadium most Saturdays during the fall.