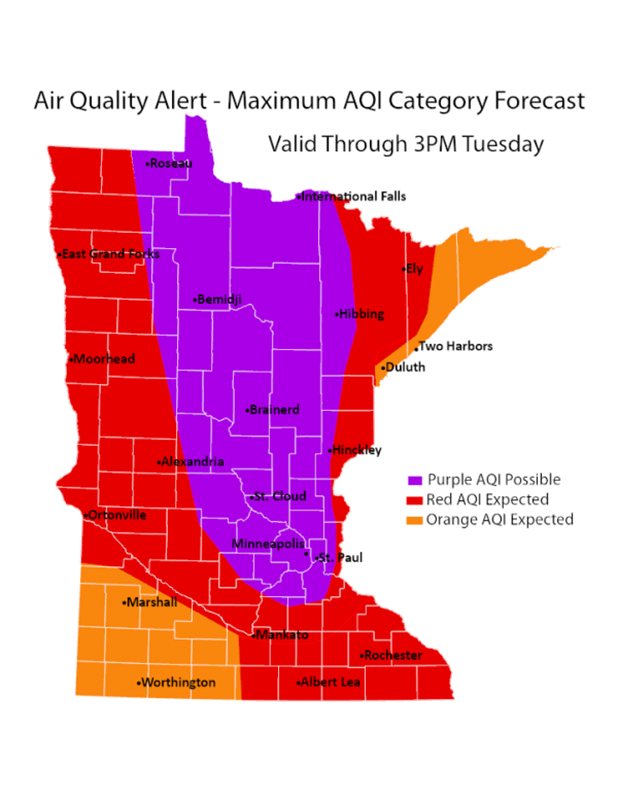 MINNEAPOLIS (AP) — The Minnesota Pollution Control Agency has extended an air quality alert until noon Tuesday for the entire state, due to what authorities are calling an “unprecedented significant air quality event.”

Minnesota has been dealing with smoke from Canadian wildfires that has created some of the highest particulate readings on record.

An air quality alert was set to expire Friday afternoon, but it was extended through Tuesday and includes the whole state. While the air will see some improvement on Friday night, things will get worse Saturday morning as northerly winds will bring a cold front that will carry more smoke from the wildfires, which are north of the Canadian border in Ontario and Manitoba.

The MPCA said smoke will continue pouring into the state into Sunday. High pressure will build over the area and the smoke will recirculate under that high pressure through Tuesday, leading to a prolonged period of heavy smoke.

The agency said fine particle levels are expected to reach the purple category, a level considered very unhealthy for everyone, across north central and south central Minnesota. That area includes Roseau, Hibbing, Brainerd, St. Cloud, and the Twin Cities. It also includes the tribal nations of Red Lake, Leech Lake and Mille Lacs.

Fine particle levels are expected to reach the orange category, which is considered unhealthy for sensitive groups — such as people with asthma or heart disease, or children and older adults — in far southwestern and northeastern Minnesota, including Marshall, Duluth, Two Harbors, and the tribal nation of Grand Portage.

Minnesota Gov. Tim Walz was part of a group of governors who held a virtual meeting with President Joe Biden on Friday to talk about wildfires in the U.S.

Minnesota and some of its neighboring states are also dealing with a worsening drought.