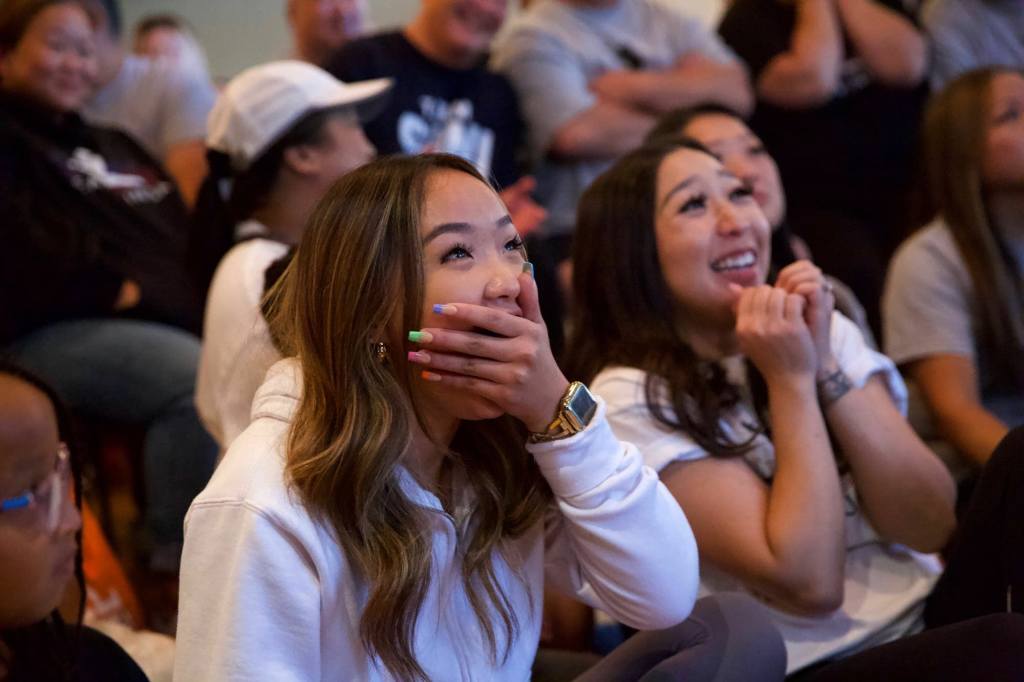 Shyenne Lee reacts as she watched Sunisa win the gold medal in the women’s gymnastics all-around in Oakdale, Minn., on Thursday. "I’m just so proud of her. I know how hard she works." Evan Frost/MPR News

St. Paul’s Sunisa Lee stepped into an even brighter spotlight Thursday as she won gold in the individual all-around gymnastics competition at the 2020 Tokyo Olympics.

The sun wasn’t even up when John Lee arrived at an event center in Oakdale to watch his daughter compete. More than 200 people packed into the space to join him.

“There are a lot of people here to support Sunisa,” John Lee said. “I’m just happy, you know — a little bit nervous, but happy.”

Lee says for previous Olympic events, they’d gathered in family homes, but they decided they needed a bigger venue this time.

In Oakdale, her aunt Cecelia Lee had some nerves before the first event.

Suni is the first Hmong American to represent Team USA in the Olympics.

“Feeling very surreal about everything because who would have thought, you know, that this is happening? To our family, to her, to our community. So just very excited,” Lee’s aunt said.

Cecelia and other family members had to cancel plans to go to Tokyo to watch in person. Instead, they follow everything on TV, but together as a family. Lee’s aunt talked about watching the Olympics earlier in the week, including the team gymnastics competition, in which the Americans took silver.

“Everybody was quiet. It would be like quiet, and then as soon as they’re done, a huge breath came out from everyone at the same time. What an amazing experience,” she said.

It was a little more boisterous this morning. The crowd cheered as the 18-year-old nailed the vault. And then the uneven bars — Lee’s strength. Then they watched (some between their fingers) as Lee stumbled a bit on the balance beam, but recovered. She sailed easily through her floor routine, and as her closest competitor stepped out of bounds on the floor, the excitement grew in the room.

And then the scores came. Lee had won the gold medal.

Minutes after, her sister Shyenne Lee cried and beamed as her sister Sunisa became the center of the state and the country’s attention.

“I’m just so proud of her. I know how hard she works. I wish I can give her a big hug right now. I’ve been texting her all day today,” Shyenne Lee said.

Then her phone rang. It was Sunisa.

“What the heck!” Shyenne Lee said in disbelief to her sister. “How do you feel?! You can breathe!”

In an interview with NBC, Sunisa said she wasn’t sure how she’d celebrate. Maybe eat pizza. She’ll compete again next week in individual events.

Lee also noted how much of a supporter and influence her father has been for her.

“I am so happy that she got the gold, and I don’t know what else to say. It’s just surreal, you know?” John Lee said, calling this moment the culmination of years of hard work and sacrifice.

“I never expected this, but she did it. Thirteen years of hard work, and she did it.”

Minnesota offers $100 rewards to unvaccinated who get shots