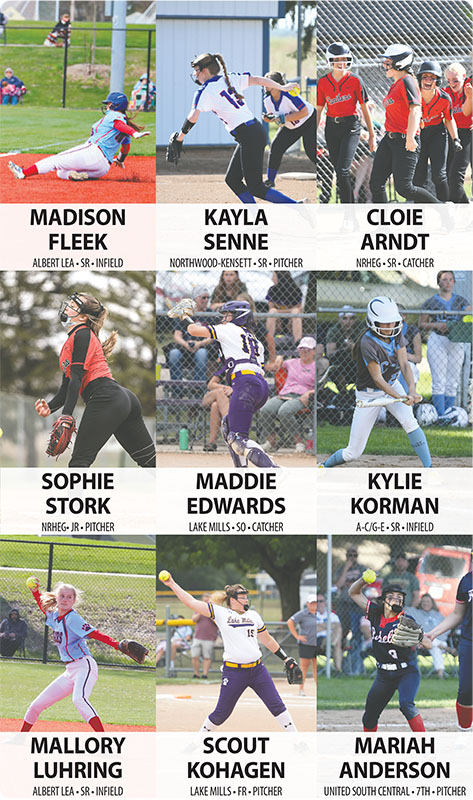 Madison Fleek was a power house at the plate in the 2021 season. Fleek led the area in batting average, recording a hit in over half of her at-bats with a .510 average. Fleek notched 25 hits this season, five of which were doubles and two were triples. She hit in 14 runs and scored 12 runs herself.

The Tigers finished the season with a 4-16 record and a 0-2 exit from the Section 1AAA playoffs. Albert Lea head coach Derek Fleek said Madison Fleek was a leader on the team this season, finishing on top in numerous offensive categories.

Senne ended her career with the Northwood-Kensett softball program as one of the most decorated pitchers in school history. This season, Senne recorded 267 strikeouts, 70 more than the runner-up. She also recorded her 800th career strikeout in the final game of the season.

Senne was also a force at the plate, finishing as runner-up in batting average with a final mark of .488. She recorded 30 hits on the season, 12 of which were doubles, one triple and two homeruns. Senne hit in 25 runs and came across the plate 22 times herself.

The Vikings finished the season with a 9-16 overall record and a 4-12 Top of Iowa East Conference.

Arndt had an impressive season for the NRHEG softball team, tying the lead for most hits in the area with 34. Arndt also led the area with five homeruns, while also hitting three triples. She recorded 28 RBI on the season and came in for a run 30 times herself.

NRHEG head coach Wendy Schultz said Arndt’s numbers speak for themselves, adding that she led the team in many statistical categories.

“Has held down the duties behind the plate for years,” Schultz said. “Just a workhorse. She will be missed.”

Sophie Stork was one of the area players that performed at a high level both in the pitching circle and at the plate. Stork recorded 197 strikeouts for the Panthers this season, while also finishing with an area-best 1.3 ERA. Offensively, Stork tallied a batting average of .386, 32 hits, 31 RBI and 25 runs.

“Sophie is a threat both offensively, as well as defensively,” Schultz said. “I’m glad she is not a senior.”

Maddie Edwards is the lone sophomore in the area to make the Tribune’s first team. She was the fourth highest finisher in batting

average, with a .447 season. She tied the area-lead in hits with 34, two of which were homeruns. She also recorded 31 RBI.

“Softball is her passion,” Byrnes said. “She has spent a lot of time looking to improve.”

As a lead-off hitter for the Wolverines, Kylie Korman finished the season with a .462 batting average and 30 hits. She scored 31 runs and hit in another eight.

Mallory Luhring was one of eight players in the coverage area to finish with a batting average above .400, finishing at .417. Luhring recorded 20 hits, four of which were doubles and one was a triple. She tallied 18 runs, 10 RBI and three steals in the Tigers 4-16 season.

Fleek said Luhring was a mainstay on the varsity lineup for three years and a leader on and off the field.

Scout Kohagen was a major factor in the Bulldogs flipping the script from their previous season in which they went 2-12 to this season, finishing with a 12-12 record.

Kohagen totaled 133 strikeouts and an opponent batting average of .171. Her strikeout total also put her in the top 20 pitchers in the entire state of Iowa in Class 2A.

The coverage area was filled with tremendous pitching talent this season. Mariah Anderson, the youngest player to make this year’s All-Area team, added to that. As just a seventh grader, Anderson made herself at home on the Rebels varsity lineup, striking out 127 batters and only allowing 40 runs. Anderson also had three games in which she struck out over 15 batters.

“Her impressive seventh grade season led her to receive All-Conference honorable mention honors in the Gopher Conference,” said head coach Brandon Neseth. “The future is bright for Mariah with her strong work ethic, and we are excited to see what she can do in the future.”