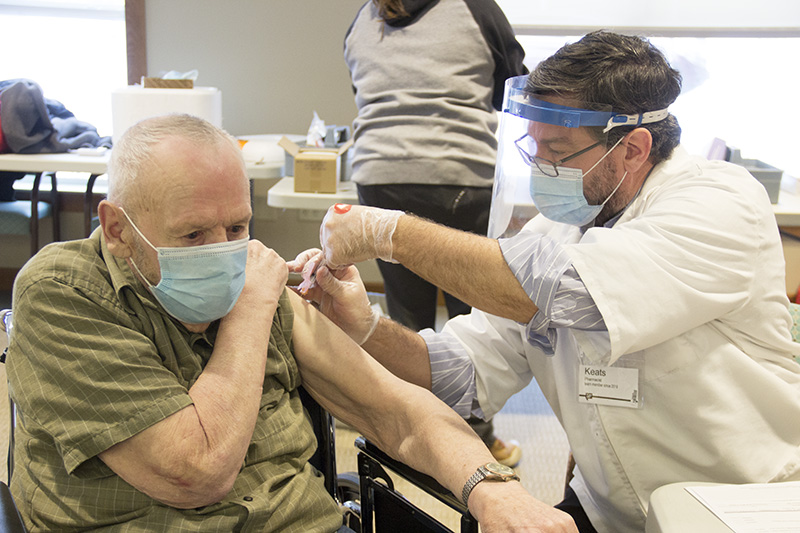 The CEO of one of the senior care facilities in Albert Lea said he was not surprised at President Joe Biden’s announcement Wednesday that nursing home staff will be required to be vaccinated against COVID-19 as a condition for those facilities to continue receiving federal Medicare and Medicaid funding.

Biden unveiled the new policy Wednesday afternoon in a White House address as the administration continues to look for ways to use mandates to encourage vaccine holdouts to get shots.

“If you visit, live or work in a nursing home, you should not be at a high risk for contracting COVID from unvaccinated employees,” Biden said.

There are hundreds of thousands of nursing home workers around the country not vaccinated, according to federal data, despite those facilities bearing the brunt of the early COVID-19 outbreak and their workers being among the first in the country to be eligible for shots.

Scot Spates of St. John’s Lutheran Community in Albert Lea said at his facility there are currently about 50% of the 300 staff who are vaccinated, while 95% of residents and tenants are vaccinated.

“It’s concerning that about half of our staff is not vaccinated because I know people die from this virus, and this really concerns me,” Spates said.

He said he wishes the vaccine did not have to be mandated and wishes people could have instead simply trusted research from nearby Mayo Clinic, one of the best health care institutions in the world, that the vaccine is safe.

“If their epidemiologists are saying the vaccine is safe, I would trust Mayo health researchers over something (on social media),” Spates said.

He said he still remembers the huge relief he felt the day St. John’s had its first vaccinations and knowing all the people who would have some protection against the virus.

Despite having days set aside to vaccinate employees, he said there have still been many who have had concerns, similar to others out in the community. Some are afraid of the vaccine, some don’t trust the government and others believe false information they read on the internet about the vaccine, he noted.

Thus far, St. John’s has had one person who died from COVID-19 at the Luther Place campus. The person tested negative for the virus on a Monday and died on a Tuesday. The person was re-tested after they had died and was found to have tested positive.

When asked whether he thought he might see some employees leave when the mandate goes into effect, Spates said he hoped that would not be the case.

The new mandate, in the form of a forthcoming regulation to be issued by the Centers for Medicare & Medicaid Services, could take effect as soon as next month.

Spates said from what he had heard thus far about the announcement, people would still be able to opt out if they had a medical reason they could not get the vaccine or if they had a religious objection. He had not heard yet whether staff who do not want to be vaccinated can instead opt to test once or twice a week instead of getting vaccinated.

Mark Parkinson, the president and CEO of the American Health Care Association and National Center for Assisted Living, praised the Biden decision, but called on him to go further.

“Vaccination mandates for health care personnel should be applied to all health care settings,” he said. “Without this, nursing homes face a disastrous workforce challenge.”

Last year CMS used similar regulatory authority to prohibit most visitors from nursing homes in an effort to protect residents.