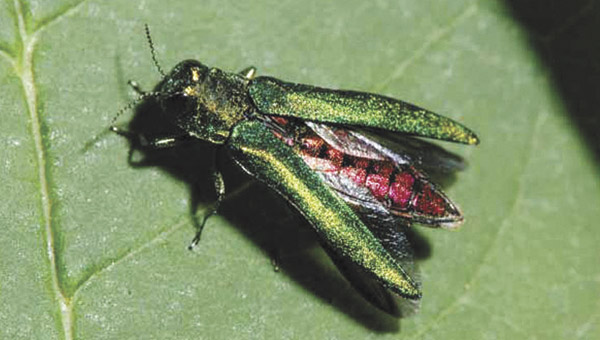 The emerald ash borer has been found in Winnebago and Worth counties in Iowa for the first time, according to the University of Iowa Extension this week.

The ash-tree killing beetle has now been found in 84 of Iowa’s 99 counties. It was confirmed in neighboring Freeborn County last month.

The positive samples came from Forest City in Winnebago County and Manly in Worth County.

According to the University of Iowa Extension, emerald ash borer threatens all ash species. The wood-boring insect feeds on the inner bark tissue, disrupting the transport of water and nutrients. The cumulative damage of EAB feeding eventually kills the tree, and infested trees usually die within two to four years.

Indicators of an infestation may include canopy thinning, leafy sprouts shooting from the trunk or main branches, serpentine (“S”-shaped) galleries under the bark, bark splitting, woodpecker damage, and 1/8-inch D-shaped exit holes.

While the adult beetle can fly short distances, people have contributed to the spread of this pest by moving infested material, including firewood. People are reminded to use locally-sourced firewood where it will be burned to help limit the spread of EAB and other invasive pests.