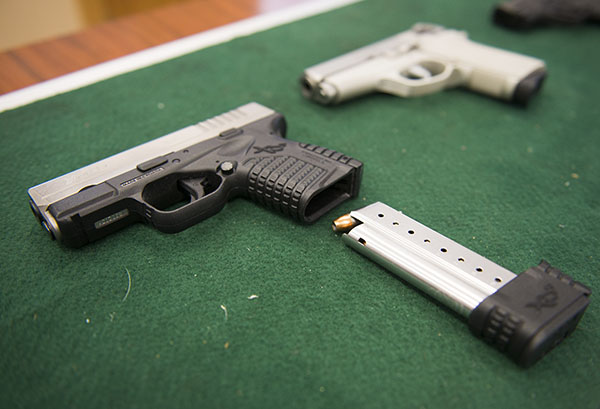 MINNEAPOLIS — The Minnesota Supreme Court ruled Wednesday that a state law requiring individuals to have a permit to carry a handgun in public is constitutional and does not violate the Second Amendment.

The ruling comes in the case of a man who was charged with carrying a pistol without a permit. Nathan Hatch was arrested in 2018 after Metropolitan Airport Commission police stopped to help him after his truck broke down. He told officers he had a gun in the back seat and did not have a permit, and officers found a loaded pistol.

Hatch was convicted of a gross misdemeanor. On appeal, he tried to strike down the state’s permit-to-carry statute, arguing it violated his right to bear arms and failed to survive strict scrutiny because it was not narrowly tailored to advance the state’s interests.

“Considering the undisputed compelling governmental interest in ensuring public safety and the narrowly tailored provisions of the statute to achieve that interest, we conclude that the permit-to-carry statute withstands strict scrutiny,” the justices ruled. “We therefore hold that the permit-to-carry statute does not violate the Second Amendment to the United States Constitution.”

The Supreme Court said that to survive strict scrutiny, a law must be justified by a compelling government interest and be narrowly tailored, meaning that it must achieve the government’s interest in the “least restrictive means.”

Hatch’s attorney, Lynne Torgerson, said she was challenging the criminal penalties a person without a permit could face for exercising their right to bear arms. She plans to ask the U.S. Supreme Court to review the case.

“It is unconstitutional to punish people … for simply carrying a handgun in public,” she said. “People shouldn’t have to be subjected to severe criminal penalties simply for exercising pure constitutional behavior.”

The justices said it is not difficult to get a permit to carry in Minnesota, as long as certain criteria are met. The court found that the statute also leans in favor of the person applying for the permit, showing it’s easy for someone to exercise his or her Second Amendment rights. And if a permit is denied, an applicant can appeal.

“Indeed, it is hard to imagine a less restrictive firearm permitting scheme than the one provided by the permit-to-carry statute and its related provisions. Law-abiding citizens over the age of 21 need only show that they have passed a gun safety course and that they are not a danger to themselves or others to receive a permit to carry a handgun in public,” the justices wrote.

Torgerson disagreed, saying it costs money to apply for a permit and take a gun safety course, and a sheriff ultimately determines whether someone is too dangerous to have a gun.

MINNEAPOLIS — A coalition of news media outlets has asked the judge who oversaw the trial of Derek Chauvin to release... read more