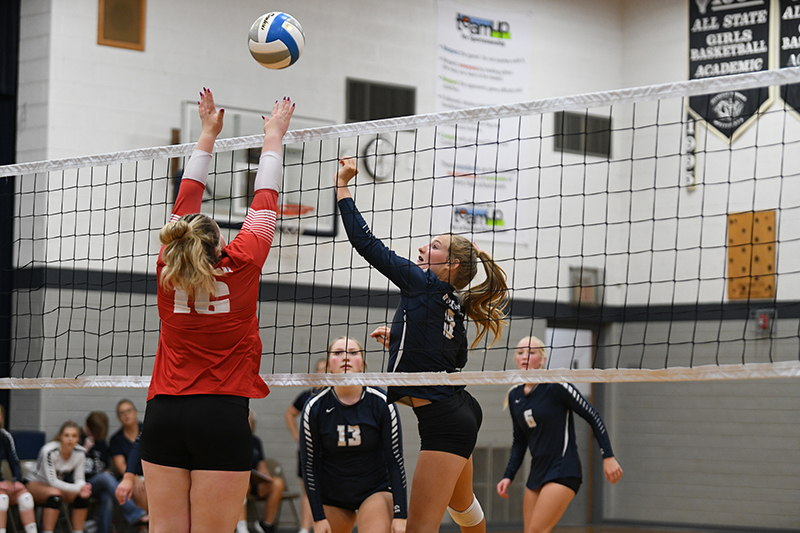 Glenville-Emmons junior Lauren Heskett hits the ball over the fingertips of a Houston player Tuesday night at home. The Wolverines lost to the Hurricanes in straight sets. Tyler Julson/Albert Lea Tribune

The Wolverines came out to a strong start in the first set, building a 20-12 lead. However, a determined Hurricane team battled back, winning the set and going on to win the match 3-0.

Both teams came out in the early portion of the first set trading points back-and-forth. After being tied at 5-5, it was the Wolverines who took the first big run of the game, going on a 15-7 run and climbing out to a 20-12 lead.

The Hurricanes slowly started to claw their way back into the set, closing the game to 21-16 and forcing the Wolverines to take a timeout in an attempt to halt the momentum. The timeout did little to curb the Hurricanes as they closed the deficit even further before knotting the set at 23-23. Needing to win the set by two, both teams battled up to 25 before the Hurricanes pulled out the set win 27-25. 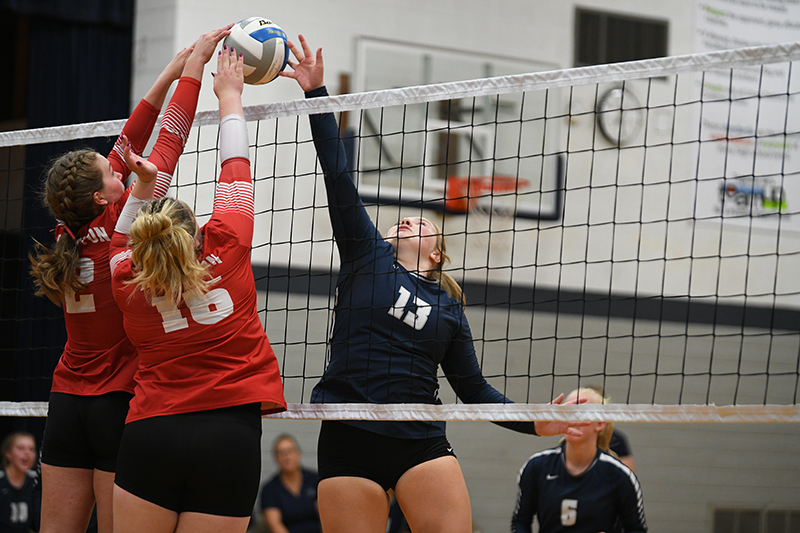 Senior Myah Anderson goes after a jump ball at the net Tuesday night. The Wolverines hosted the Hurricanes of Houston in the season opener. Tyler Julson/Albert Lea Tribune

Houston took their momentum and ran with it, cruising out to a  5-0 lead to open the second set. Glenville-Emmons trailed the entire set but battled back and nearly pulled off the late comeback, bringing the score to 23-21 at one point. However, the Hurricanes would cut off the comeback short, pulling away to win the set 25-23.

The third and final set was all Hurricanes.

After climbing out to a 10-6 lead, the Hurricanes never allowed the Wolverines to come within four points again. Houston won the third set, 25-18.

Juniors Lauren Heskett and Rachel Heskett played well in both the front and back rows Tuesday night. Senior Gracie Dahlum was good with setting her teammates up for big kills, they were just unable to find open spots on the floor.

Ultimately, it was mistakes and the hard hitting of the Houston front line that doomed Glenville-Emmons.

The Wolverines fall to 0-1 to start the season and will be back on the court Thursday when they host Southland.