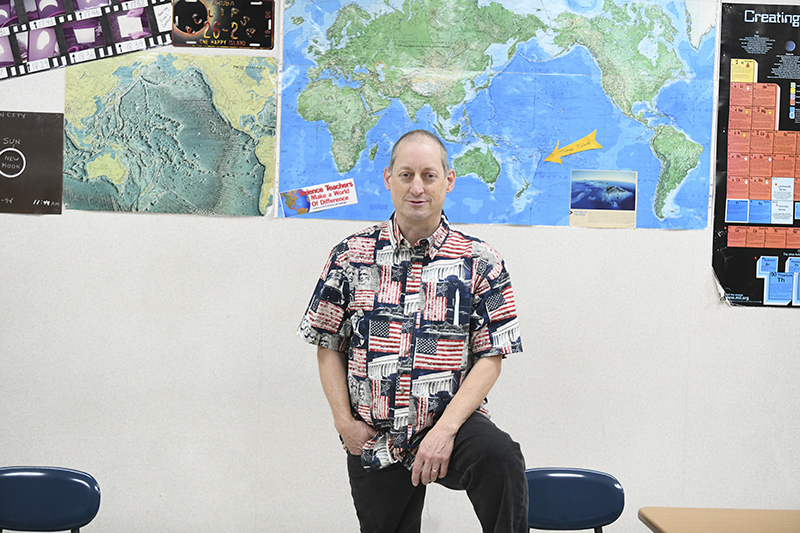 Ken Fiscus, along with Jim Haney, Mindy Kruger and Daine Heaney are the four remaining teachers at Albert Lea High School who were with the district on the day of the 9/11 attacks. Fiscus said he remembers that day to be one of the worst days of his life up to that point. Tyler Julson/Albert Lea Tribune

Many people, young and old alike, could probably tell you where they were and what they were doing on the day of Sept. 11, 2001. For the younger generation, it was sitting in a classroom preparing for the school day to begin. But what about the teachers? How did they handle the news and what was it like with numerous children looking to you for possible answers?

Four teachers at Albert Lea High School who were on staff on that day in 2001 are still teaching at the school today. Jim Haney, Ken Fiscus, Diane Heaney and Mindy Kruger all say the day started just like any other.

For Haney, the day began by wishing a friend and colleague a happy birthday. Fiscus was teaching in his advisory period, and Heaney was teaching voice lessons.

Their stories about how they heard the news were relatively the same: A student or fellow staff member came into their rooms with the distressing news. Fiscus said he didn’t believe it when he first heard about it.

“In bolts this kid who was a troublemaker, not in my advisory group, he charges in ‘Mr. Fiscus, turn on your TV. Two planes just hit the World Trade Center.’ I said ‘Josh, get out of here.’ I didn’t believe him,” Fiscus said. “He just popped in my room and said that out of the blue. Then a quiet kid who was in my advisory comes in right behind him and silently shook his head. It looked like he’d seen a ghost. That’s when I walked over and turned on the TV.”

Haney said a teacher came into his classroom as he was teaching about the American Revolution and told him about the first plane. He said he didn’t think much of it at the time because he thought it was a small single-engine plane that was involved in an accident. Haney said when the lesson was done, a student asked if they could turn on the TV and see what damage had been done.

“I had turned on the TV and I knew that this was much worse than a single-engine plane hitting a building,” Haney said. “About a minute into watching, the first tower fell and my heart sank knowing that thousands of people had just died. My students were silent and respectful as they knew the gravity of the situation.”

Heaney said she turned on the classroom TV just as the second plane crashed into the towers. She said she couldn’t believe what she was seeing. She remembered going into the bathroom, shaking, and saying a prayer for the country and for everyone involved.

The rest of the day was a lot different than any other normal day. Heaney said she had two different choir classes throughout the rest of the day and everyone was in shock. She said she gave her classes the option of singing or not, and everyone decided the music they were working one was an appropriate way of expressing their emotions at the time. Heaney said they sang, talked and tried to carry on the best they could.

Haney said he kept the TV in his classroom the rest of the day so he and his students could stay up to date on what was happening.

“It was hard for my students to comprehend what had just happened, just like it was hard for me to understand,” Haney said. “The questions they had were ‘What happened? And ‘Who would do this?’ I did not have a good answer.”

Both Haney and Fiscus compared it to the Pearl Harbor attacks. Fiscus talked about what was going through his head when he first saw the destruction.

“This was war,” Fiscus said. “The only thing I could compare it to when I was talking to the kids was, this is what Pearl Harbor may have felt like for my grandparents … Both towers had already been hit. We’ve been attacked. Life is going to be different from here on out.”

Heaney, Fiscus and Haney all called the day one of the saddest in American history. After school practices and activities were canceled that day, allowing students and staff to be home and see their families.

“I remember just wanting to get home and hug my husband and kids,” Heaney said. “They were little at the time and we tried not to scare them and limited what they saw on TV, but everyone knew something bad had happened.”

Fiscus said he remembers how everyone came together in the days that followed the event.

“One of the neat changes was how patriotic everybody was,” Fiscus said. “You couldn’t find an American flag in any stores. That Halloween, the number one costume was a firefighter.”

As part of the lesson plans on the 20th anniversary of the 9/11 attacks, Haney said students will be watching segments of survivors and family members of the victims talk about that day. He said it is important for students today to be taught about it because they were not alive when it happened and it’s his job as an educator to make sure they know the story of that day.

In 2012, Haney was named the Minnesota History Teacher of the Year, which allowed him to study for a week with the curator of the National 9/11 Memorial and Museum. He said he heard multiple stories of bravery during his time there.

“If you get a chance, please go to New York City and spend a day at the (9/11) Museum and Memorial,” Haney said. “It is one of the saddest places on earth, but so important that we remember the sacrifice of all the people, firefighters, police, soldiers, victims and survivors of the attack. History has to be remembered in its totality, the good and the bad. 9/11 was the worst day, but it must be remembered or we will forget the sacrifice of so many.”