Man charged for firing rifle, injuring man who attempted to steal his pickup

A Glenville man is facing charges for allegedly firing a rifle and injuring a man who was attempting to steal his pickup Sunday night near Gordonsville. 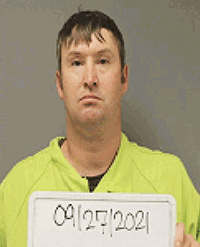 James Joseph Vinton, 38, was charged with one count of second-degree assault with a dangerous weapon and one count of intentional discharge of a firearm that endangers the safety of another, both felonies, Tuesday in Freeborn County District Court.

Deputies were dispatched to 11859 800th Ave. in Freeborn County after receiving a call from a woman that someone had stolen a blue Chevy pickup and that her husband had shot a gun into the air.

When a deputy arrived, the pickup was in the ditch and hung up on a fence, and other men were standing in the road. The person who had attempted to take the truck was sitting on the ground near the driver’s side of the vehicle and said he couldn’t stand or move the right side of his body.

Court documents state at first, the deputy could not see any injuries to the man, but after helping him remove his foot from the fence, he saw two puncture wounds to the top of his back. The wounds were not bleeding at that time, but the man’s white undershirt was soaked in blood, and there was blood running on the board of the truck and on the side of the passenger seat.

The man reportedly admitted to stealing the truck and said he had been shot. He was taken to Mayo Clinic Health System in Albert Lea and eventually flown to St. Marys Hospital in Rochester.

A neighbor reportedly told authorities he was making supper when Vinton called him and told him his blue pickup was stolen and heading north in the pasture. He said he drove to Vinton’s residence, and he arrived near where the truck had been in the ditch.

The neighbor said the man got out of the truck and was acting strange, complaining of being shot. He said he had never heard any gunshots but that Vinton told him he had shot into the air.

Vinton’s wife told a Sheriff’s Office detective she and her husband had gone to bed and could hear an engine revving outside their home. Vinton got up to check it out and saw a vehicle in the north

pasture. He went outside to investigate and then came back in and told her someone had stolen the pickup. He reportedly grabbed a .243 rifle from the bedroom closet and left the house again.

She said she called 911 to report the theft and at that time stepped outside and heard the engine revving and could hear fence posts being run over. She said she heard a gunshot and her husband came back and brought the gun back into the house. Vinton told her he fired a shot into the air and also said the other man had been shot.

When interviewed by a detective, Vinton said he was laying in bed with his wife and could hear engine noises outside, so he got up to check it out. He said he saw his blue pickup being driven out of the farmyard, so he had his wife call 911, and he grabbed his rifle out of the closet.

He said there was one bullet in the gun and he thought he grabbed a couple more. He said the pickup kept getting stuck in the fence and eventually got free.

After that shot, the pickup continued to the southeast corner of the pasture fence, went through the fence and was in the ditch on the roadway. At that time he said he thought the pickup was directly in front of him and facing away. As the pickup was climbing onto the roadway, it started to turn left to head north on 800th Avenue, and he told the detective he allegedly fired a second round from his rifle.

He reportedly told the detective he thought about shooting over the pickup again but thought about nearby U.S. Highway 65 and decided not to. He instead said he thought he was shooting at the rear driver’s tire to get the vehicle to stop.

The truck ultimately drove north on 800th Avenue and then got stuck in the ditch down the road. He said the man asked for help, telling him he had been shot. Vinton reportedly told him that 911 had been called.

In court Tuesday, Vinton’s lawyer, Robert Foley, requested Vinton be released from the jail on his promise to appear for his next court hearing, given his lack of criminal history in Minnesota and his roots in the community. Foley said Vinton had lived in Minnesota for 11 years and in Freeborn County for four years. He also noted Vinton had his own business and would be a minimal public safety and flight risk.

Assistant Freeborn County Attorney Abigail Lambert said Vinton had a fugitive from justice charge related to a theft in Nebraska that was pleaded to a misdemeanor and that given the seriousness of the offense — and the fact that second-degree assault carries a presumptive prison sentence if found guilty — she requested unconditional bail be set at $60,000 with conditional bail at $10,000.

Freeborn County District Court Judge Ross Leuning ordered unconditional bail be set at $60,000 and conditional bail at $10,000. For the conditional option, Vinton must follow a series of conditions, including remaining law-abiding, having no contact with the victim, not using or possessing firearms and signing a waiver of extradition.

He is next slated to appear in court Oct. 7.

Lambert said the man who was injured, whose name has not been released, is expected to make a full recovery. As of the court hearing, he had not been charged, but authorities state the investigation is ongoing.