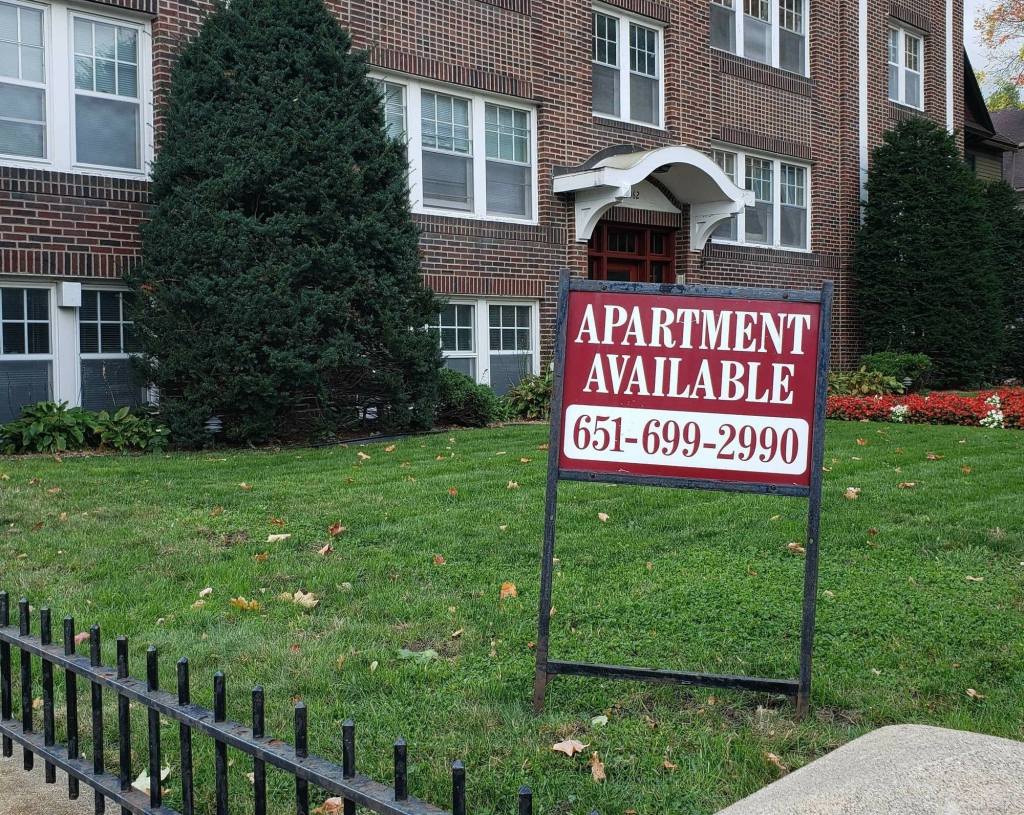 A sign advertising an apartment for rent on Marshall Avenue in St. Paul. Some of the protections against evictions that were put in place during the early days of the pandemic have expired. MPR News file photo

Eight cases that cycled through an Anoka County housing court one morning last week offered a glimpse at the shaky ground some Minnesota families are on as COVID-19 inspired eviction protections fade.

In a Zoom hearing that moved in fits and starts, attorneys for property owners sought a judge’s approval to remove tenants who are many months and many thousands of dollars behind in their rent.

One woman settled but will pay thousands in tightly bunched installments and have to find a new home after November. A couple of others must vacate even sooner after failing to appear.

But the more common outcome? A halted process due to a pending application for special financial aid through RentHelpMN, the program that distributes some of the money from the federal government aimed at preventing pandemic-related problems.

“What that means is four households, four families right now aren’t receiving an eviction action or they aren’t receiving a writ to get out of their house within seven days,” said Lael Robertson, a policy attorney with Minnesota Housing, a state agency that is working to sign eligible tenants up for a program that can mean the difference between a roof over their head or a frantic search for a place to live.

The proceedings in Anoka County — another 10 cases are up for review there Monday — are similarly playing out in courthouses around Minnesota. Advocates for tenants and landlords agree they’re seeing increased case volume as the weeks go by. It coincides with the gradual easing of a moratorium designed to prevent widespread evictions during the pandemic.

As of last week, there is no longer a required 15-day notice ahead of eviction filings over delinquent rent. Lease terminations can also occur more easily. An active aid application is the only lifeline for some, but even that won’t matter after next June.

A 37-year-old named Chris was among those whose housing was on the line in the court hearing. MPR News agreed to use only his first name because he’s worried about being able to find new rental housing if he loses the apartment he’s in.

In an interview, Chris said he’s lived there for more than a decade and always paid on time. But he was in a commission-based job as sales plummeted early in the pandemic. He fell two months behind in his rent, then more. He’s now several thousand dollars in the hole.

Chris said once his personal financial situation perked up, he tried to work out a payment plan to get caught up. But that arrangement didn’t fly.

Chris said he’s had a pending application with RentHelpMN since July, and has gone back and forth with the program’s operators. No money has been sent out on his behalf.

“I really don’t know what the hang-up is at this point,” he said.

A pre-qualification letter is what saved him this day.

He’s fighting at a minimum to keep an eviction off his record, which would complicate a search for a new place if he can’t stay put. After the court hearing, he said he was crafting a letter to his landlord asking for another chance.

But, he acknowledged, “I think it’s soured to the point where I do have to move.”

On the other end of the divide is attorney Don Perron, who has little nice to say about RentHelpMN.

“It’s a busted system from minute one that is a cluster that is just going to have to kind of muddle through,” Perron said.

He represents property managers, some of whom have gone more than a year without getting rent out of units. Perron has had cases where a tenant first applies for the help after a court hearing starts.

“Then we get spit back immediately a letter that says ‘pending application,’” he said.

To date, nearly 50,000 applications have come in through RentHelpMN for assistance tied to past-due rent or utilities. About $144 million has gone out — with much more in requests in the pipeline.

Robertson of Minnesota Housing said she understands the frustration of all the parties with a stake in the program. She said even though there have been months of awareness efforts, people are still getting familiar with the rental assistance program.

“We regularly have people who didn’t know about it who are now getting applications in that may otherwise have not had them in,” Robertson said, adding, “so us being there and saying ‘Nope, you could get your back rent paid’ is a vital link to getting people stably housed.”

The agency has dispatched staff to eviction proceedings to provide real-time help and information on where applications stand. Legal aid groups are there, too.

Elizabeth Sauer, managing attorney for Central Minnesota Legal Services, said eviction filings, notices to vacate and lease terminations are clearly rising as state protections ease. And while some renters have bought more time by tapping into available aid, what lies ahead worries her.

“There’s a lot of people who are in this circumstance. We could have a whole bunch of landlords who just decide they are not going to continue to rent to these tenants who have struggled to pay their rent during the pandemic,” she said. “I would just kind of see it as a musical chairs type situation.”

“People are sending notices to vacate. On month-to-month cases you can send a notice to terminate your lease,” he said. “And those will be coming due in 30 days and/or 60 days, so there will be a lot of people kicked out where the phase-out law does not protect them.”

He said prior to the pandemic he averaged 70 eviction cases per month. As the moratorium has loosened, that climbed back above 40 last month. He expects it to ratchet up.

“We’re going to have floods after November first and January first. It’s going to be awhile before we’re back to normal,” he said. “It’s going to be swamped but I look at it as there’s a big bulge and the law is now letting them pour out.”