Evelyn “Evie” Rae (Kappers) Read of Woodbury, MN passed away on Tuesday, October 5, 2021 at the age of 75 after a 21 month battle with cancer.  Evie was born August 15, 1946 in Preston, MN, the daughter of Freddie Kappers and Alma (Broadwater) Kappers. She grew up in the Spring Valley area where she graduated from Spring Valley High School in 1964.  On May 14, 1965, she married Larry Read in Greenleafton, MN. The couple made their home in Albert Lea, MN until November 1966, when Larry was drafted into the Army. In 1967, Evie joined Larry in Mainz, Germany where they lived for 1 1/2 years. After returning from Germany, they settled back in Albert Lea where she was employed until they started their family in 1975. They raised two daughters and lived in Albert Lea for many years until they moved to Fairmont and then later on moved to West Des Moines. In 2011 they moved to Woodbury, MN.  Evie was in the neighborhood book club, enjoyed walking and counted cross-stitch. She was active in various church groups and enjoyed singing in the choir. She was a member of the Lioness Club of Albert Lea, volunteering her time to various club activities. Evie was also an active member in the St. Croix Valley Corvette Association.  Larry and Evie enjoyed traveling. After retiring in 2008, they traveled the US extensively in their Corvette and vacationed in Europe and Alaska, making many friends along the way. They also enjoyed spending the winter months in Arizona. Evie enjoyed the time she spent with her children and grandchildren.  Evie is survived by her husband, Larry and daughters, Sarah (Matt) Stay and Jennie Read. She is also survived by two grandchildren, Lucy and Sam Stay; her sisters, Jan Evenson and Margie (Bernie) Wampach; numerous nieces and nephews; and many friends. Evie was preceded in death by her parents, two nephews, and brother-in-law.  In lieu of flowers, the family prefers memorials to King of Kings Lutheran Church – Music Ministry or Garden Ministry.  A celebration of Evie’s life will be held at King of Kings Lutheran Church (1583 Radio Drive, Woodbury, MN) on October 25, 2021. Visitation begins at 11:00am, service at 12:00 noon, followed by lunch at the Church. The family requests that everyone wear a mask to protect those who have compromised immune systems. Interment will be at the Minnesota State Veterans Cemetery in Preston, MN at a later date. 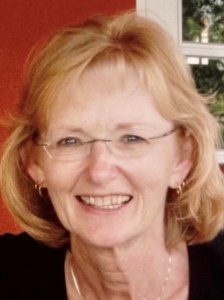