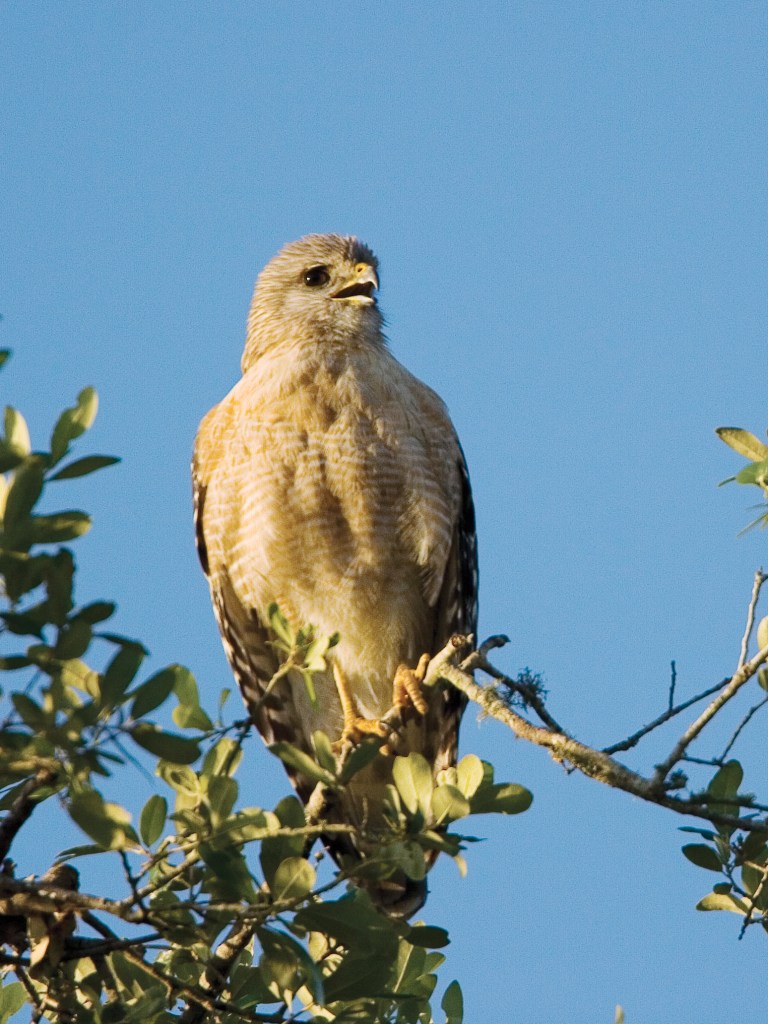 MANKATO — When he was a carpenter in Mankato, fall could be a dismal time for Jim Amundson. He became keenly aware of the hours he would soon have to spend outside working in frigid, snowy conditions.

Now he can’t wait for September and October to arrive. From Aug. 15 to Dec. 15, the retired Amundson spends at least three hours every day watching and counting migrating raptors — all birds of prey — as part of Bethany Lutheran College’s Hawkwatch program.

“It used to be, with Labor Day — I hated it. That was the end,” Amundson said at Land of Memories Park, one of the program’s two watching spots. “Now it’s the beginning.”

His volunteer work began early this year, however, because he had a particular species of bird on his mind.

In late August of 2020, he spotted four Mississippi Kites, a species the program hadn’t recorded since 2014. Typically Kites are seen along the Gulf Coast, and their rarity in Minnesota brought bird enthusiasts from across the state to Amundson’s normally quiet Land of Memories observation area.

“This year I spent over 70 hours coming here during the summer, which I normally don’t do, hoping that the Mississippi Kite would show up again,” he said with a laugh. “But nothing happened.”

Chad Heins, the biology professor at Bethany who started the Hawkwatch program, said the Kites are presumed to have lived in Minnesota, although birders never found a nest. He assumes this summer’s dry conditions kept the birds farther south.

Though 80-degree weather with southern winds seemed to limit migration, late September to October is the period of peak movement through the Minnesota River Valley for raptors, the Mankato Free Press reported.

The main movers lately have been broad-winged hawks, half of which typically fly south in a narrow window between Sept. 17 and Sept. 24.

Data on the HawkCount website shows the push of broad-winged hawks came early, with 1,588 recorded on Sept. 12 and 777 the next day. More than 3,250 flew south over Mankato this fall, and Heins said the last of the birds will leave this week.

During the last decade more than 7,000 birds of 19 total species have been recorded on average each fall, according to Bethany’s Hawkwatch webpage. Over the last three years that number has jumped to 8,437 per fall season.

Mass migrations of raptors, especially the broad-winged hawks, are momentous to witness, both Heins and Amundson said.

“When you see those big kettles of five- or six-hundred birds all at one time, that kind of seals the deal,” the 72-year-old Amundson said when asked whether he ever entertained other hobbies in retirement.

He’s one of the program’s leading volunteer observers, spending hundreds of hours each fall and spring surveying the sky. Only a few others spend a comparable amount of time counting, Heins said of Amundson.

The season of Red-tailed Hawks is Amundson’s favorite, he said. On average, half of the birds migrate over Mankato from Oct. 7 to Nov. 3, and Amundson loves to recline in a zero-gravity chair with his binoculars and scan the sky a mile above him. The Bethany counters have seen about 50 so far this fall.

Many ask Amundson how he is sure to avoid double-counting hawks when they fly in large masses thousands of feet high.

Relying on thermal winds to push them, the birds find a stream and fly in tight circles upward until they run out of air, he said. From there, individual birds begin to split from the kettle and head south.

Watchers stand at the ready; in Amundson’s case, that means carrying binoculars on a sling around his shoulders, two handheld metal tally counters and two other counting devices, one in either pocket. He clicks with one hand while his other steadies the binoculars he uses to track the diverging raptors.

“One nice thing about hawks: They get up late, they don’t have to be up at the crack of dawn. They wait until the thermal warms up — they’re real lazy, they like to take advantage of everything,” he said. “They don’t expend any energy, they just glide from one thermal to the next on their way down south.”

He has learned how a Turkey Vulture’s wobbly glide differs from an eagle’s straight-winged, smooth ride on the wind. He has come to understand the feisty nature of smaller Sharp-shinned Hawks, which he calls “The Chihuahua of the sky” because they’re always picking fights.

Turkey Vultures are the main bird to watch late in September, and they fly in packs of hundreds over Land of Memories park, Amundson said. The count so far is just under halfway to the 2,100-bird expectation.

Then local birders’ attention moves to Red-tailed and Red-shouldered Hawks through October, before Bald Eagles mark the final major push of the season in November. Between 1,200 and 1,500 Bald Eagles were recorded in each of the last three years.

As long as he finds himself losing track of time, lost in the sweep of the raptors’ movement, Amundson said he plans to watch until he can’t any longer.

“My dad was 90 before he went into assisted living … I could still do this for another 20 years,” he said, chuckling.