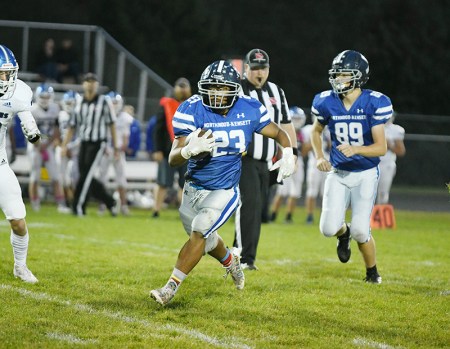 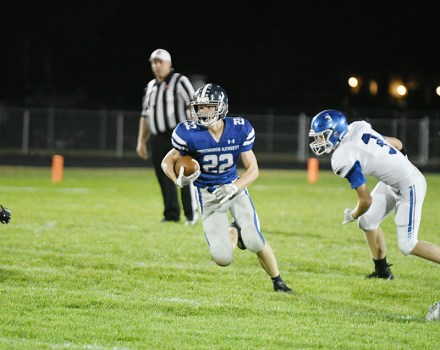 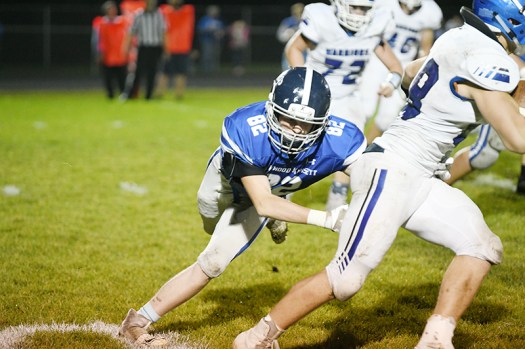 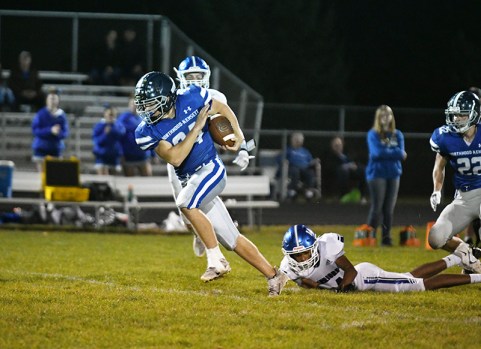 Senior Drake Tiedemann breaks through for a 58-yard touchdown reception late in the first quarter for the Vikings. Tyler Julson/Albert Lea Tribune 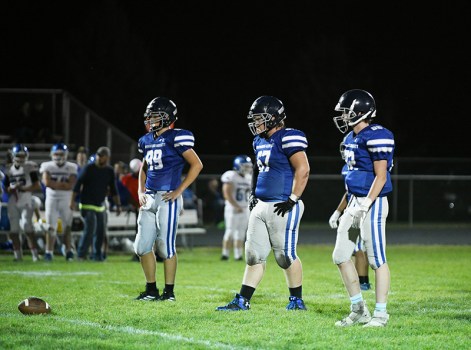 The Vikings wasted no time, jumping on the Warriors early and never looking back, dominating to a 63-0 victory.

Senior Drew Wilder was the first Viking to find the endzone, running in from one-yard away.

On the ensuing drive, Northwood-Kensett forced a fumble and picked it up well into Rockford territory. Senior Josiah Kliment capitalized on the turnover a few plays later, punching in a short run to give the Vikings a 14-0 lead with just over five minutes to play in the first quarter.

Junior Lamonte Sims came away with an interception on the next Rockford drive, and senior Drake Tiedemann capped off the Vikings’ drive with a 27-yard touchdown reception from Wilder.

Just over a minute later, Kliment found the endzone for the second time in the game, rushing and spinning out of a tackle for a 39-yard touchdown.

The Warriors were again forced to punt after three quick plays on their next drive, giving the ball back to the Vikings nearing the end of the quarter. However, Northwood-Kensett put one more score on the board before the end of the quarter when Tiedemann caught another pass and ran it in from 58 yards out.

The Vikings had a 35-0 lead at the end of the quarter and would keep a running clock through the rest of the game.

The Vikings punched in one touchdown in the second quarter to take a 42-0 lead into halftime.

They scored another touchdown in the third quarter and followed it up with two JV touchdowns in the final 30 seconds of the game.

The Vikings climb to 4-2 on the season and have two more games remaining in the regular season.

They will hit the road Friday to take on St. Edmond before capping off the regular season at home against Bishop-Garrigan.