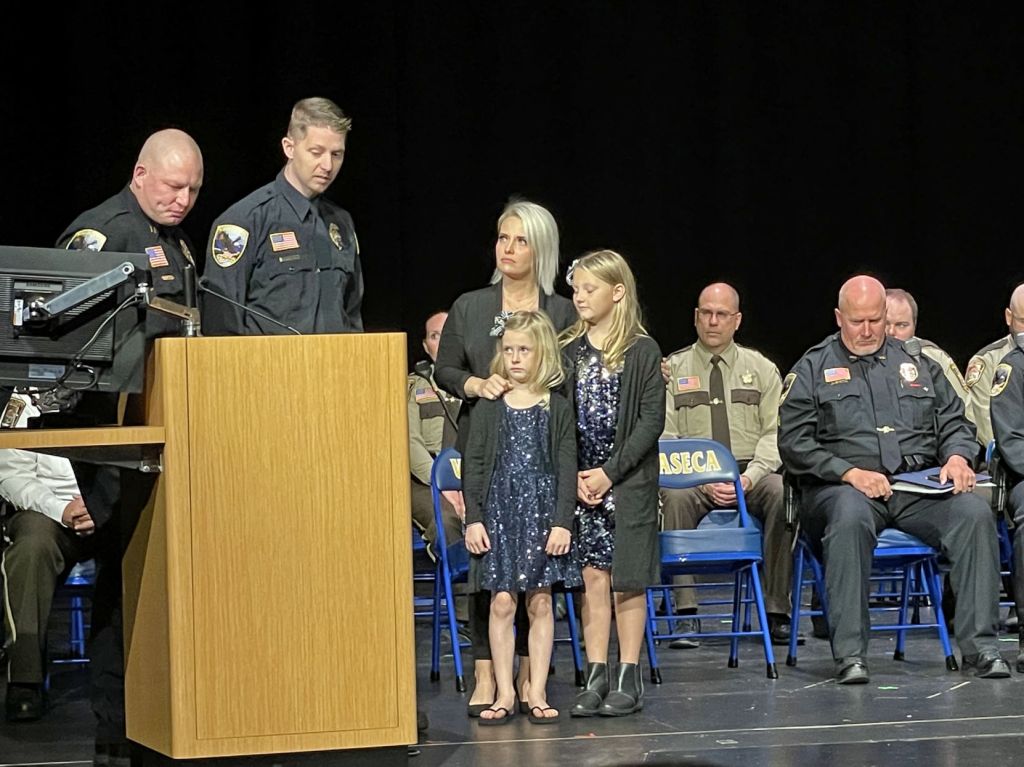 Captain Kris Markeson, who was present at the scene of Matson’s shooting, choked up as he presented Matson his retirement badge, Law Enforcement Purple Heart and Medal Honor. (Julian Hast/southernminn.com)

It has been 21 months since Waseca Officer Arik Matson was shot in the head and critically wounded while responding to a report of a suspicious person, and last week he officially retired.

The ceremony for his retirement took place at a community commendation ceremony Oct. 14 in which Waseca residents, first responders and members of public safety organizations received commendations inside the Performing Arts Center at Waseca Junior/Senior High School.

After all other commendations were finished, Waseca Chief of Police Penny Vought introduced what was, in some ways, the biggest event of the evening.

“We understand very well that this is a very sad event,” she said about Matson’s retirement. “But it’s also an event where we should attempt to find and have gratitude. We are grateful and thankful for so many things, especially that Arik is here with us tonight.”

Mary Williams, a Waseca resident on whose property the shooting took place, addressed Matson and the audience.

Williams thanked the Waseca Police Department, and expressed gratitude for Matson for protecting her and her husband, Jack, that evening. She said that watching Matson become stronger after his injury helps them in their healing process. She hugged Matson.

Vought returned to the microphone to award Laurie Anderson — a friend of Matson’s wife, Megan — for meritorious service. Vought had contacted Anderson the night of Matson’s injury to meet Megan at her house and inform her that her husband had been wounded. Anderson then accompanied Megan to North Memorial Health Hospital in Robbinsdale and stayed with her until well into the next morning. Anderson left her friend for only a few hours before returning to the hospital at 2 p.m. and staying until 10 p.m.

“[Anderson’s] assistance that night and in the days to follow certainly gave us great comfort that Arik and his family were being well taken care of,” Vought said.

The final commendations of the evening were for Matson himself, whose badge number, 222, was retired from active service that night. No other officer will ever have it.

Capt. Kris Markeson, who was present at the scene of Matson’s shooting, choked up as he presented Matson his retirement badge, which was the same badge Matson wore on the day he was shot. The badge was given to him in a box onto which Matson’s favorite Bible verse, Proverbs 28:1, was inscribed: “The wicked flee when no one pursues, but the righteous are bold as a lion.”

“We will always consider you a member of our department,” Markeson said, clenching his jaw before embracing Matson in a hug.

Matson was also awarded the Law Enforcement Purple Heart, which is for officers injured or disabled in the line of duty, as well as the Medal of Honor, which is awarded to members who, “without reckless disregard, knowing and purposefully expose themselves to the risk of death or serious injury,” according to the awards and commendations policy of the Waseca Police Department.

For Matson’s departure, Vought also read aloud a poem she wrote for him, which took her more than three minutes to read. It began, “A part of us is missing, a part we can still see / A part of him has been injured, but is still with us thankfully / His name is Arik Matson, a hero to us all / He will always be remembered as the one that stood so tall.”

Matson himself was the last to address his former department and the city of Waseca, with his wife and children at his side.

“I could stand up here for the next 15 minutes and try to thank every person, every group that helped save my life that night, but that would probably get really boring and inevitably I would forget somebody,” he said. “I have thought what I could have done to not get shot that night, but the only thing I could think of is I could have not responded. But that is not what we do. No matter how horrible or dangerous the call is, we always respond, because that’s what we stand for.”

“I’m thankful to be alive today,” he went on, “and thank God sparing me so that I can continue experiencing the joys in life.”

Other commendations of the evening covered a broad range of different cases, including those of Waseca County Sheriff’s deputy Josh Langr, who was electrocuted by a dangling power line in October 2019 at the scene of a fatal car crash, and Waseca head football coach Brad Wendland, who collapsed in September from a medical emergency during a football game.