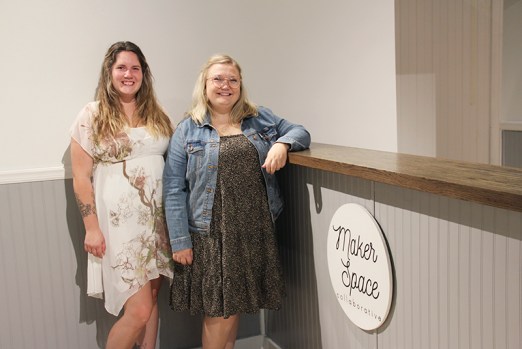 Megan Haukoos and Nina Cardel are opening Maker Space Collaborative, a space for home-based makers to showcase their products and to offer a variety of classes. Sarah Stultz/Albert Lea Tribune 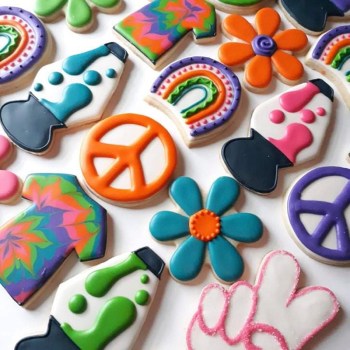 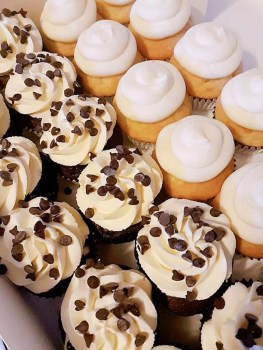 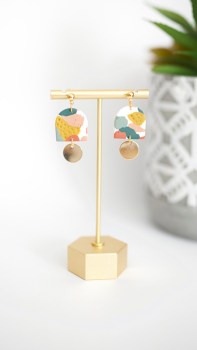 Cardel uses polymer clay in her creations. She mixes the colors by hand, rolls them out, cuts them, bakes them, sands them and assembles them. Provided 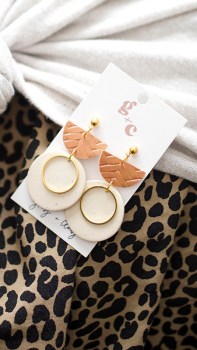 Nina Cardel created grey+clay as a pandemic hobby. It has taken off and she now sells wholesale in four stores across three different states. Provided

Two Albert Lea small business owners are opening a new business this month in Skyline Plaza to give other home-based makers a place to showcase and sell their creations.

Maker Space Collaborative is essentially “a storefront for home-based businesses and those looking to learn more about starting their own small business,” according to the Facebook page for the business. It will also offer educational events and classes.

Cardel said running businesses out of their homes, they know it can be pretty hectic sometimes doing so.

Haukoos said she started Meggie Sue’s Cupcakes six or seven years ago making birthday cakes for families and friends. It has since grown to where she takes part in vendor shows and other town festivals.

“Over this last year, especially, I’ve grown exponentially because it tended to be more of a small get-together type of time, so more people wanted to make it a bit more special,” Haukoos said.

The business offers cakes, cupcakes and decorated sugar cookies, which she said have been particularly popular in the last year.

Cardel said she started grey+clay, making earrings, necklaces and keychains a year and a half ago as a quarantine hobby.

“It took off way more than I ever expected it to,” she said. “It grew quickly and as I grew I really worked on my craft and making sure I was putting out really quality pieces, and with that people started to realize the quality of my work and started purchasing more.”

Her pieces are created with polymer clay, and she mixes the colors by hand, rolls them out, cuts them, bakes them, sands them and assembles them.

“A lot of love goes into each pair of earrings I make,” she said.

She offers wholesale in four different stores across three different states — including Sterling Main Street in Austin, Willy’s Nillies in Northwood, a hair salon in the Twin Cities and a boutique in Florida — and is open to additional opportunities as well.

The two women said they met because they were at many of the same markets.

At one point, Cardel’s business started taking off faster than she anticipated and she was looking for an assistant who could help her.

“I loved her stuff from the very first sight, so I was like, ‘Of course I will,’” Haukoos said.

As they started to get to know each other more, they said they found out they had a lot more in common than they first realized. They both have 4-year-olds, who have become the best of friends.

Haukoos said her parents own Big Dream Organics in the Skyline Plaza and let her know that a space would be opening up in the plaza.

“Me and Nina kind of have the same style — we like the industrial boho type stuff, so we both fell in love with it immediately,” Haukoos said of their new space.

“It kind of has an urban, bigger city feel,” Cardel added.

They immediately got a hold of the owner of the mall and said they’d be interested in renting the space, and have so far been working on cosmetic upgrades.

Cardel will utilize part of the space in the back for her office and creating space, while Haukoos will use another area for storage.

The women said they had heard lots of positive feedback about the opportunity thus far and were planning a soft opening at the end of September.

“I’m very excited for the growth in being able to have this space,” Cardel said. “I think it’s going to be a really good thing.”

They said they are also excited to bring more people to that side of town and said they think Skyline has a lot of potential.

Their grand opening will be from noon to 5 p.m. Oct. 30. They said they each plan to have products available for sale, and they hope to have two to three other makers, as well.

Anyone interested in showcasing their hand-curated products is encouraged to reach out to the women on the Makers Space Collaborative on Facebook.