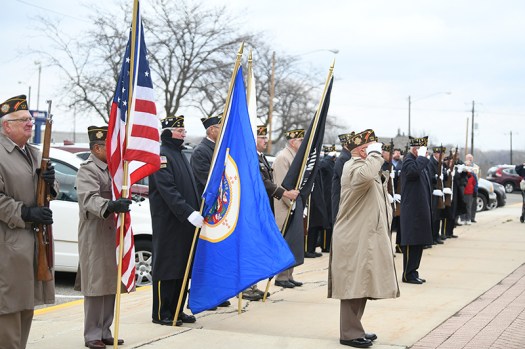 Many people gathered outside the Freeborn County Courthouse Thursday morning at the Veteran's Memorial flag for a shot program to celebrate Veterans Day. The VFW Post 447 performed the raising of the colors, the 21 Gun Salute and Taps. Tyler Julson/Albert Lea Tribune 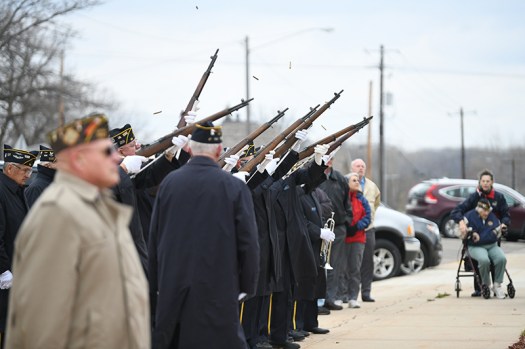 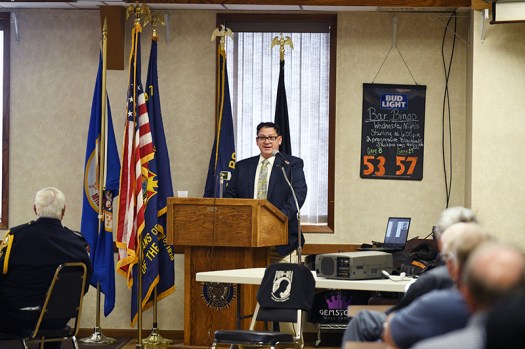 After the program outside the courthouse, attendees were invited to the American Legion, where they listened to guest speaker, retired Navy Lt. Commander Brandon Montanye. Tyler Julson/Albert Lea Tribune

A large group of veterans and community members gathered outside the Freeborn County Courthouse Thursday morning to start off the annual Veterans Day program.

Gathering at 10:50 a.m. at the Veterans Memorial flag outside the courthouse, attendees watched as the colors were raised on the flag pole, followed by a 21 Gun Salute and the playing of Taps.

Following the short outdoor ceremony, everyone was invited to the Albert Lea Legion for a meal and guest speaker.

VFW Post 447 Senior Vice-Commander Brian Tlamka welcomed everyone to the ceremony and was followed by the opening prayer led by VFW Chaplain Larry Wiegel.

VFW Honor Guard Commander Tim Donahue then led the group in the pledge of allegiance and the moment of silence, recognizing the MIA/POW.

The guest speaker at the ceremony was 1993 Albert Lea graduate Brandon Montanye, who is a retired Navy Lt. Commander.

The meal was then served after the dinner prayer by Weigel.