Robert K. Miller was born on April 28, 1925, in Tulare, South Dakota, the son of Frederick “Fritz” and Clara L. (Freye) Miller. Following his graduation from Tulare High School, he served our county in the US Army. He was inducted on December 13, 1945 at Fort Snelling, MN and was discharged as Private in November of 1946. In 1948 he was inducted into the National Guard in South Dakota and in 1950 he was activated during the Korean Conflict. Bob received his Honorable discharge from the US Army and South Dakota National Guard in May of 1952. Bob attended Augustana College in Sioux Falls, SD and later completed business training at Nettleton College of Business in Sioux Falls. 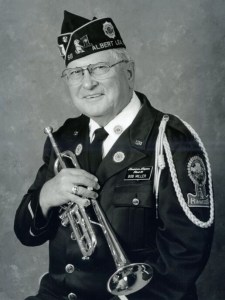 Bob met the love of his life on the dance floor. He married Doris M. Kvanbek on June 28, 1952, at Hope Church in Minnesota, MN. He began his banking career at Norwest Bank in Redfield, SD, then First Bank System in Sioux Falls, SD, retiring from Security Bank in Albert Lea, MN. In addition to being an active member of Grace Lutheran Church in Albert Lea, Bob had been a member of the Shriners for more than 40 years, the Masons for more than 70 years, and worked with the Annual Parade of Music for more than 30 years. He was a proud member of the American Legion. As commander he though about his grandson and the children of Albert Lea. He was then instrumental in funding, in permissions for the skatepark. In 2005, he received the Legionnaire of the Year award from Albert Lea Leo Carey Post #56 in 2005, and was a member of the Lions Club where he was honored with the Helen Keller Sight Award. In addition to his love for his family and his country, his greatest passion in life was music. He enjoyed dancing, listening and playing all genre’s. He played trumpet for the American Legion and Shriners for many years and was in many dance bands including Darrel Boyd Band, Blue Banners, Dakotians and Switches. He also played for the Symphony while in Sioux Falls. Robert died at his home on Monday, December 14, 2020. He was 95.

Private interment services was in Tulare, SD, on Friday, December 18, 2020.

Cards of condolence and sympathy may be sent on behalf of the family to Bonnerup Funeral Service, 2210 East Main, Albert Lea, MN 56007. Family suggests memorials to benefit the Shriners, Lions Club, the American Legion or Grace Lutheran Church.