MINNEAPOLIS — Prosecutors and attorneys for the suburban Minneapolis police officer charged in Daunte Wright’s shooting death seated two more jurors for her trial Wednesday, including a woman who said she owns a handgun and a stun gun. 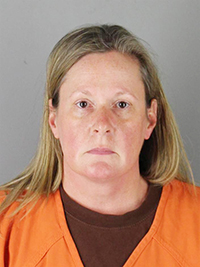 Kim Potter, 49, is charged with first- and second-degree manslaughter in the April 11 shooting of Wright, a 20-year-old Black motorist, following a traffic stop in the Minneapolis suburb of Brooklyn Center. Potter, who is white, has said she meant to use her Taser on Wright after he pulled away from officers and drew her handgun by mistake.

The stun gun owner said she strongly disagrees that police officers should not be second-guessed for their decisions.

Also seated Wednesday was a woman who said she thought protests against police in the Minneapolis area have had a negative effect because of the property damage some have caused. She also said she somewhat disagrees with the idea of defunding the police, saying “You’re always going to need police officers.”

Six jurors have been seated so far. Opening statements are scheduled for next Wednesday.

Attorneys and Judge Regina Chu have probed potential jurors this week for what they knew about Wright’s death and about their views of protests against police brutality that were frequent occurrences in Minneapolis even before George Floyd’s death.

On Tuesday — the first day of jury selection — an attorney for Potter said jurors would hear directly from the former officer, who resigned two days after she shot and killed Wright. Body-camera video recorded the shooting, with Potter heard saying, “Taser, Taser Taser” before she fired, followed by, “I grabbed the wrong (expletive) gun.” .

“Officer Potter will testify and tell you what she remembers happened, so you will know not just from the video but from the officers at the scene and Officer Potter herself what was occurring,” Paul Engh, one of her attorneys, told a potential juror.

Wright was shot in Brooklyn Center as former Minneapolis Officer Derek Chauvin was standing trial only miles (kilometers) away for killing Floyd, and Wright’s death sparked several nights of intense protests in the suburb.

Jurors seated Tuesday included a medical editor, a retired special education teacher, a Target operations manager and a woman whose occupation wasn’t given. Two are men, two are women; three are white and one is Asian, according to the court.

The medical editor said he has a very unfavorable view of the “blue lives matter” slogan, saying he believes it’s less about supporting police than about countering the Black Lives Matter movement. But he also said he opposes defunding the police.

The Target employee described himself as somewhat distrustful of police but said he recognized “that it’s a very hard job.”

“I think sometimes you just react, and sometimes it might be a wrong reaction, but, you know, mistakes happen,” she said. “People make mistakes.”

Among the jurors dismissed Tuesday was a woman who said Potter should have known the difference between her gun and her Taser. A man who was dismissed suggested Wright was to blame for his death: “I think if he would’ve listened to the (police) directions, he would still be with us.”

Jurors’ names were being withheld and they were not shown on the livestream of the trial.

The most serious charge against Potter requires prosecutors to prove recklessness; the lesser only requires them to prove culpable negligence. Minnesota’s sentencing guidelines call for a sentence of just over seven years on the first-degree manslaughter count and four years on the second-degree one. Prosecutors have said they would seek a longer sentence.