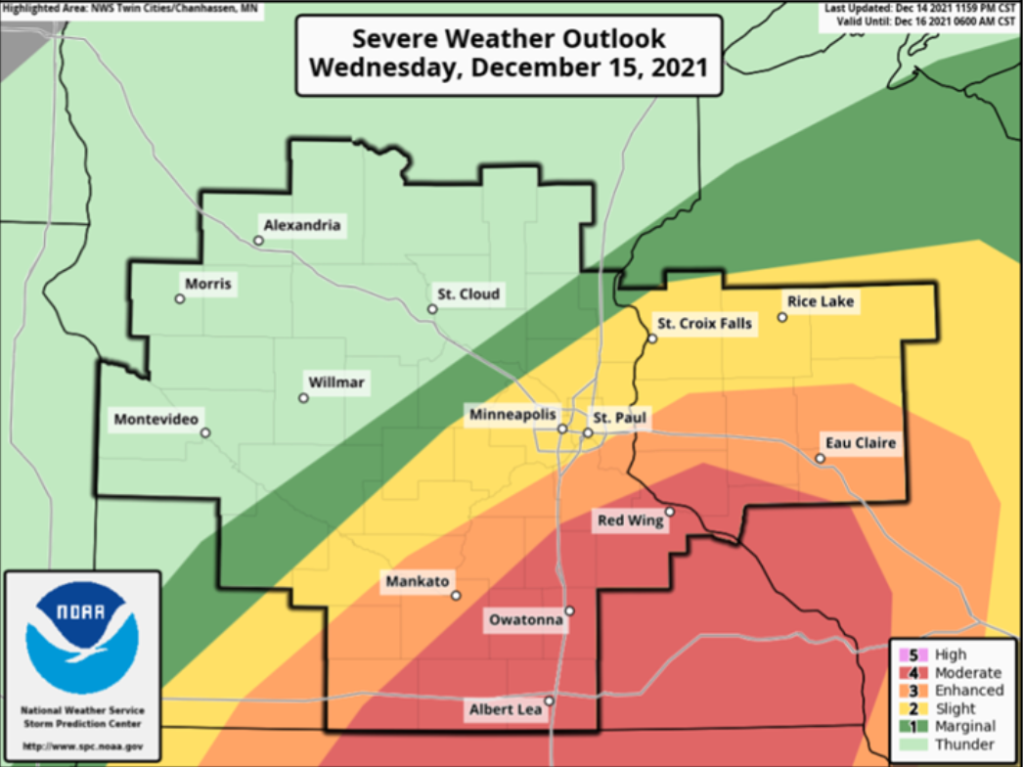 An unprecedented outbreak of severe thunderstorms for this time of year is likely to take place this evening, bringing potentially historic damaging winds and possible tornadoes, according to the National Weather Service.

“Today’s volatile day of weather has not been seen before in mid-December,” the weather agency states in a special statement on its website.

The highest risk of severe thunderstorms is southeast of a line from Redwood Falls to Rush City.

The weather agency advises damaging winds could blow down trees and power lines, and widespread power outages are expected. People should avoid being outside in forested areas and around trees and branches, and if possible, should remain in the lower levels of their homes and avoid windows during the windstorm.

Because of the speed of the storm, conditions are likely to deteriorate quickly. Unless preparations are made ahead of time, it may be hard to take adequate shelter when a storm begins to approach, it stated. People should pay close attention to warnings issued.

A high wind warning is in effect for Freeborn, Faribault, Waseca and Steele counties from 6 p.m. today to 6 a.m. Thursday without southwest winds of 30 to 40 mph, with gusts up to 65 mph expected locally.

The area is under a tornado watch through 8 p.m.

Travel will be difficult, especially for high profile vehicles.

Temperatures were expected to reach as high as 62 degrees today and drop to 26 for the low on Thursday.

Plummeting temperatures overnight could result in a flash freeze of residual water on roads, bridges and overpasses.