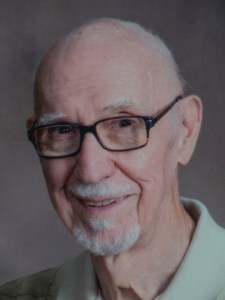 He was born in Albert Lea, MN on March 13, 1932 to parents John and Loretta (Butler) Hoelscher. He is survived by his daughters, Kristin (Dr. Timothy Schacker) Hoelscher-Schacker of Sunfish Lake, MN; Erica Hoelscher of Bethlehem, PA; Andrea (Dr. Robert Alvis) Hoelscher of Ferdinand, IN, and six grandchildren. He was preceded in death by his parents and by sisters Doris Erlandson, Marion Shaunce, Rosemary Graham, Anna Mae Lee, and Patricia Schafer.

LaVern grew up in a home on Jefferson St. with an extended family including two grandfathers, two aunts, and many foster children. His family belonged to St Theodore Parish, and he served at countless masses in his youth. His parents’ example and his Catholic faith instilled within him an abiding commitment to help the less fortunate.

LaVern taught in secondary schools for four years in Wyoming and in Missouri, where he met Helen Schwartz during rehearsals for a production of the musical Oklahoma! He screwed up the courage to ask Helen out for coffee, and he made a lasting impression by ordering a glass of milk. Helen and LaVern were married at Sts Peter and Paul Church in Boonville, MO on June 4, 1960, and they moved to Marshalltown, IA, where they built a house and raised three daughters. LaVern taught in the Marshalltown school system for 34 years, primarily in history, social studies, and government. He won the Iowa State Teacher of the Year Award in 1980-81. He was an active member of national, state, and local education associations, serving as president of the Marshall County School Personnel Association.

LaVern was well known in the community for his work on stage with the Marshalltown Community Theater and as a cantor and member of the funeral choir at St. Henry Catholic Church. From childhood, he used his beautiful singing voice to entertain and inspire. An active member of the Marshall County Democratic Party, LaVern received a phone call from President Jimmy Carter in recognition of his efforts. For many years, he volunteered his time at the House of Compassion, which offers food, supplies, and services to people in need. He was also deeply involved at the Villa Del Sol, a senior living community, where he entertained the residents with presentations and musical performances and served as resident advocate. He also contributed his time to the work of the Marshalltown Public Library.

LaVern’s family requests that donations in his name be directed to the House of Compassion, 211 W. Church St., Marshalltown, IA, 50158. A funeral will be held at a future date at St. Henry Church in Marshalltown. LaVern will be buried together with his wife at Riverside Cemetery in Marshalltown.