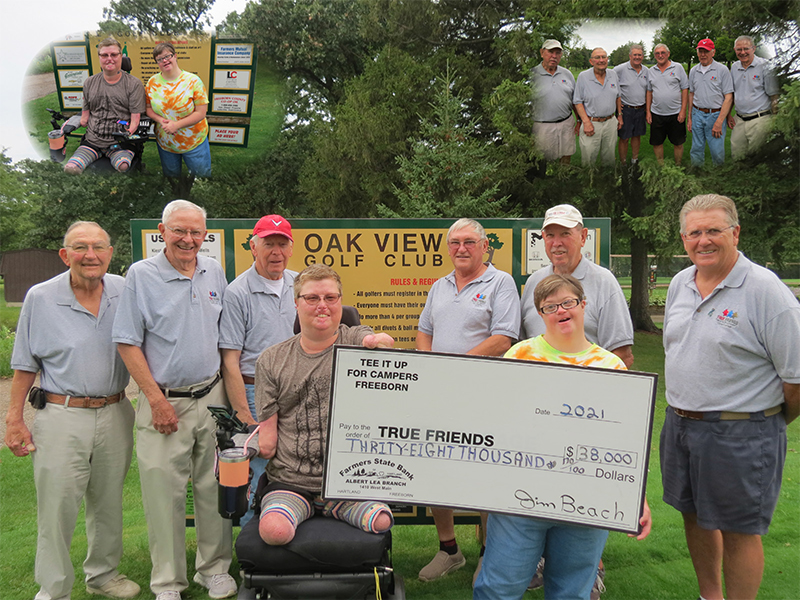 This past summer marked the 21st anniversary of the Tee It Up For Campers golf tournament fundraiser at Oakview Golf Course in Freeborn.

The Tee It Up For Campers committee is a group of local volunteers from Freeborn, Alden and Albert Lea who work together to organize the golf tournament, which supports children and adults with disabilities attending one of the True Friends camps.

This year the group raised a record setting $38,000, according to a press release. To date, the Tee It Up For Campers group has raised more than $355,000 for True Friends and campers with disabilities.

Many of the members of the Tee It Up For Campers were part of the Freeborn FFA and participated in the annual FFA corn drive. The corn drives consisted of farmers donating corn to their local FFA, who then sells the corn and donates the proceeds to Camp Courage. Once the Freeborn school closed, this group of friends still wanted to support Camp Courage, now called True Friends.

True Friends camp offers safe, accessible, natural environments where children and adults with physical disabilities, sensory and language impairments and other disabilities or illnesses discover abilities they never knew they had or thought they had lost.

True Friends offers programs and services which include summer and winter camp, day camp, respite, therapy riding, travel, retreat centers and team building. They serve individuals with and without physical developmental and learning disabilities. Through partnering with other organizations, they also hold a wide variety of health and education camps. With four Minnesota camps and a Twin Cities office in Plymouth, they serve nearly 25,000 individuals of all abilities each year.