Memorial services for Allen E. Christensen, age 82, of Albert Lea, will be held at 10:00 a.m. on Thursday, February 3rd, 2022, at First Lutheran Church in Albert Lea. Rev. Roger Fears will officiate. Interment will be at Graceland Cemetery at a later date. Military Honors will be accorded by local veterans’ organizations. Visitation will be held on Wednesday, February 2nd, 2022 at Bayview/Freeborn Funeral Home from 4 to 7 pm and one hour prior to the service at the church on Thursday. Online condolences are welcome at www.bayviewfuneral.com. 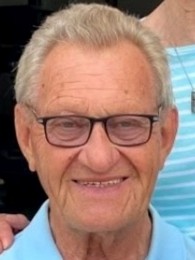 Allen E. Christensen was born on June 6, 1939 in Worthington, Minnesota, the son of Thorwald and Helen (Hulbert) Christensen. He grew up in Sioux Falls, South Dakota. Al earned his Bachelor’s degree in education from Sioux Falls College and went on to earn a Master’s in physical education from Mankato State. He served in the U.S. Air Force, stationed at Offut Air Force Base in Nebraska. On May 29, 1963, Al was united in marriage to Lyla “Tep” Jakel in Garretson, South Dakota. Al worked as a teacher with Glenville-Emmons Schools until his retirement. He also taught drivers education, spending numerous hours “behind the wheel,” some of which will never be forgotten. Al enjoyed golfing, fishing, hunting, woodcrafts, and art. He volunteered with the Glenville Fire Department for 19 years and also gave his time and talents to University of Sioux Falls football, the American Legion Honor Guard, Albert Lea Laker baseball, First Lutheran Church, and numerous community organizations. He was a man of strong faith, integrity, and welcomed everyone he met. Al touched many lives and will be remembered as dad, gramps, brother, friend, neighbor, and “Coach C.”

Al was preceded in death by his parents, brothers-in-law, and grandparents.