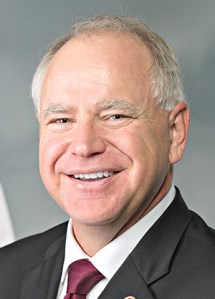 The spending plan — the third of his four-part supplemental budget plan rollout — would cost $5.1 billion over three years and includes an expansion of access to child care, funding for pre-K for 6,000 kids and $183 million for free meals for students.

The plan also includes $77 million for mental health services, in addition to paid family and medical leave, sick and safe time off for workers and a 2% increase in per-pupil funding for schools.

“This is the opportunity that sits in front of us,” Walz said during a visit to an Inver Grove Heights elementary school. “The naysayers will tell us we can’t do this — we cannot afford to not make this investment. We cannot afford at this point in time to not do the things that we’ve proposed here.”

The announcement came after Walz last week introduced a proposed $2.7 billion “local jobs and projects” plan and another proposal as part of an economic opportunity plan that would send checks of $175 or $350 to more than 2.7 million Minnesota households.

Funding for the governor’s proposals would rely on the state’s $7.7 billion budget surplus and leftover federal aid, though Walz is likely to face pushback from the GOP-controlled Senate on some of the proposed spending as Republicans want to use the surplus to cut taxes.

Senate Republicans called Walz’s proposed package a “spending spree,” citing a 2.5% increase in per-pupil funding in the first year and 2% in the second that lawmakers agreed on last session.

“Throwing more money into schools without addressing literacy and allowing kids and educators to catch up is the wrong direction,” Republican Sen. Roger Chamberlain of Lino Lakes, chair of the Senate education committee, said in a statement. “We’ll focus on kids’ reading skills and prepare them for graduation through proven, successful programs and get them on the right track.”

House Democrats on Tuesday outlined billions of dollars of investment in education and said they will look into proposals that would provide more funding for schools and child care, wage increases for teachers and a tuition freeze for colleges and universities, among others.

“Our budget surplus gives us the opportunity to invest in our future, close opportunity gaps, provide better support for our students and educators and begin tackling our workforce shortage,” said Democratic House Speaker Melissa Hortman, of Brooklyn Park. “It’s clear that the needs are great across Minnesota, and we will be working to ensure all of our children have every opportunity to succeed.”