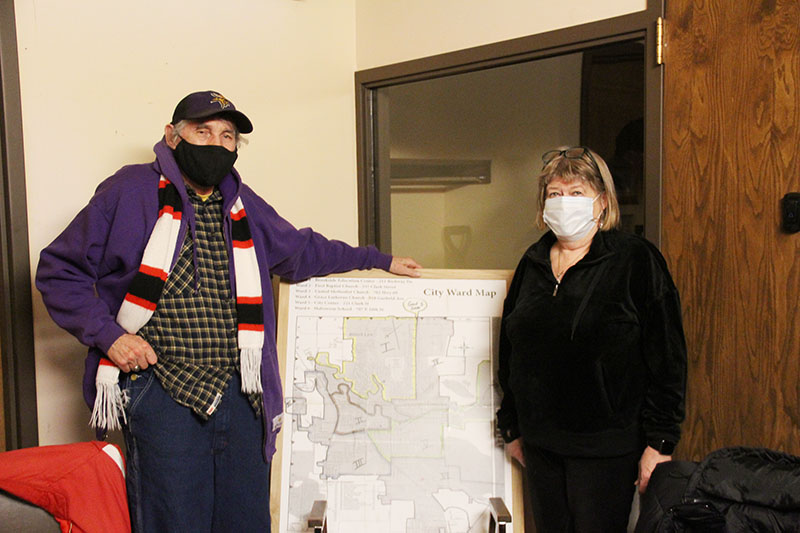 Ehren Qual and Julie Ackland collect forms at the Freeborn County DFL contactless caucus Tuesday night inside the entrance of the Union Center. DFL members had the option of returning non-attendee and resolution forms via email or in-person. The party opted for a contactless caucus because of an influx of COVID-19 cases in the county. Sarah Stultz/Albert Lea Tribune

Because of the influx of COVID-19 cases in the county, the Freeborn County DFL Party hosted a “contactless” caucus Tuesday evening.

People could turn in non-attendee or resolution forms via email or drop them off at the Union Center off of Minnesota Highway 13.

Ehren Qual and Julie Ackland were stationed right inside the Union Center doors the first part of the evening to collect forms from people who wanted to drop them off.

Qual, the party treasurer, said while there has been a lot of debate back and forth regarding politics, particularly on the national level, he thinks it is important to focus on local races.

“That’s really where it counts,” he said.

He gave the example of climbing up to the tallest hill in your neighborhood. He said what you can see at the top of the hill is the area you can have the largest impact.

Looking ahead to this year’s elections, party Chairwoman Julie Ackland said she was eager for the results of the redistricting, which will determine whether current elected officials will be able to be in the same districts, as well as determining where new candidates will need to run.

“It’s locked us in limbo until this comes out,” Ackland said.

She said she is glad to hear that there is a possibility the 1st Congressional District may change to cover mainly southeast Minnesota, and leave off more of the western part of the state.

She said she hoped the county and district conventions would be able to happen in-person.