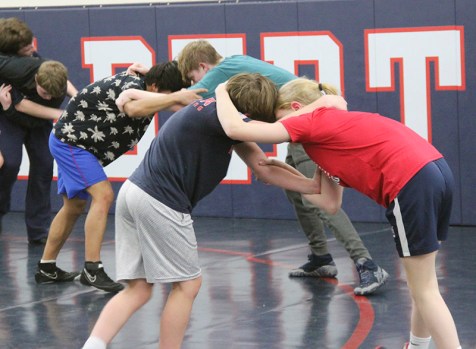 Olson spars with Groess during practice after school on Thursday in the high school wrestling room. 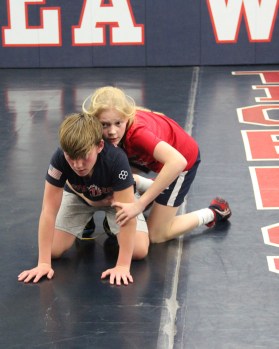 Seventh grader is first girl wrestler to compete for school

When Maggie Olson of Albert Lea was in preschool, she remembers tagging along with her brothers to wrestling practice.

She said she thought since she was already at the practices, she might as well try out the sport, too.

“Right away, she started having success,” said her father, Reid Olson. She won a few small tournaments, and in others she would win second or third place against the boys she wrestled.

“She always really enjoyed the competition and the camaraderie against kids her age,” he said.

Over the years, she kept at it, training in the traditionally male-dominated sport, practicing and competing against boys, through she has trained and competed with some girls teams through Minnesota/USA Wrestling and Summit Wrestling Academy.

She has many accolades, including being a five-time MN USA state champion, placing third at Rumble on the Red in Fargo this season and being ranked in state rankings, said Paul Durbahn, head wrestling coach and activities director at Albert Lea High School.

“It’s pretty exciting to be the first,” the 13-year-old said. “It’s definitely a step in the right direction for other girls.”

Maggie said she likes the dynamics of wrestling — that it can be both a team sport and an individual sport.

Her mother, Sarah Olson, said her daughter is more of a tomboy having grown up with two older brothers, Mike and Alex, and she has fit in and held her own well.

“Everyone in Albert Lea has been so inclusive with her,” she said. “The coaches have been great and making sure it’s known that no matter whether you’re a girl or a boy, you have equal opportunities.”

She said her daughter has been an important part of the youth team going through, filling weights that needed to be filled and having wrestle-offs like any other boy on the team would do to fill a spot.

She is proud of her daughter being the first Albert Lea girl wrestler to compete with the high school and said it brings back memories of her own experience when she was a sophomore in high school and was on Albert Lea’s first-ever girls’ hockey team.

Durbahn said Maggie is not only a great athlete, but a stronger leader and an “all-around great kid and a straight A student.” She also plays soccer, softball and hockey.

“She will pave the way for many female wrestlers in our community and area,” he said. “As a coach, we wish that all our wrestlers, male or female, to have the same skillset, work ethic, attitude and character as Maggie.”

Aside from looking to the immediate future with the section and state tournament in the forefront, Maggie, her parents and Durbahn said they hope other girl athletes in the district know about the opportunities for them to join Maggie on the mat and train and compete in the program.

“We’d love to see more girls,” Sarah Olson said. “Being the only girl has been fun, but as they get older, having some teammates would be amazing.”

While there are about five other girls in the K-6 youth wrestling program, they hope more will become interested moving forward.

Durbahn said the Albert Lea Wrestling Club plans to host some all-girl workouts in the near future in Albert Lea, and if other female athletes are interested in trying the sport, this would be a great opportunity for them.

People can visit www.albertleawrestling.com if they have questions or look for the contact information at the bottom of the webpage. They will publish more information on the workouts when dates are finalized.

“There’s no better time to do it then now,” Maggie Olson said. “You make so many friends along the way.”