Alden-Conger to perform ‘Shrek The Musical’ 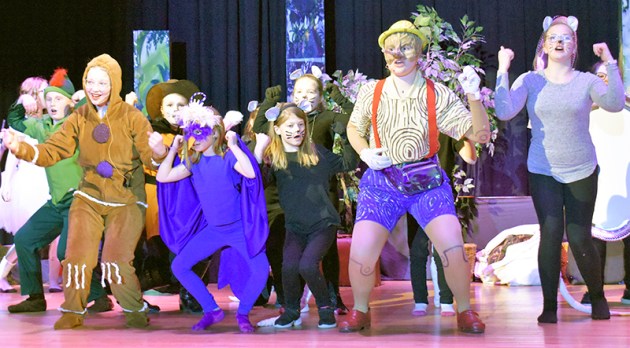 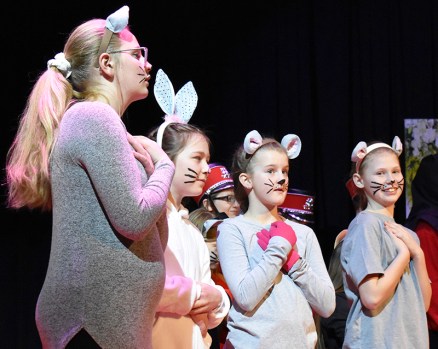 Besides the rehearsal Friday, students spent their Saturday doing a dress rehearsal with costumes and makeup. Provided 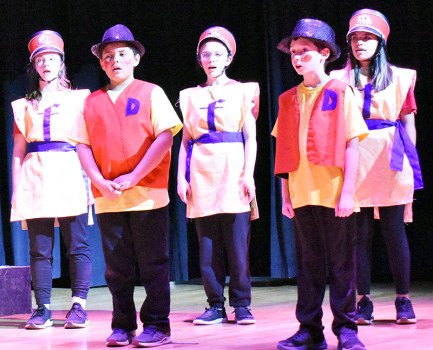 Students at Alden-Conger perform in a dress rehearsal Saturday of "Shrek The Musical." Provided 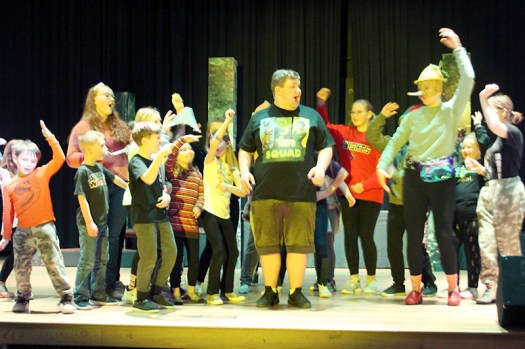 Students rehearse in the gym at Alden-Conger before this week's musical. Alex Guerrero/Albert Lea Tribune

If you were a child in the 2000s — or had children during that time period — there’s a good chance you’ve seen “Shrek,” the story about an ogre whose solitude was broken by an invasion of fairy tale characters who were banished to his forest by Lord Farquaad.

And if you haven’t seen it, now’s your chance to see a different version of it — “Shrek The Musical.” Originally performed in 2008 and written by David Lindsay-Abaire, the play will come to the Alden-Conger Public School stage under the direction of Ada Theusch.

In choosing this particular musical, she said she thought the familiarity

with the movie and the ogre who opens his heart to a princess could pull at the heartstrings of audience members while also providing laughter, puns and action.

“‘Shrek The Musical’ is a lively look at life and its challenges,” Theusch said in an email. “Wishing we are something we are not does not pay off. Be yourself and everyone else can just deal with it.”

Speaking of dealing with life, scheduling was among the difficulties she faced.

“So many of our actors participate in multiple activities, and so we attempt to schedule rehearsal time around sports, skating, dance, ninja practice and church choirs,” she said.

But on the other side of the spectrum, all the well-rounded students, she said, brought a litany of skills to the stage.

“This is not my first time participating in theater,”  Nielsen said. “I have been involved in the Alden-Conger plays since I had come back to Alden from a previous school in eighth grade.”

Besides “Shrek,” he has performed in works such as “Seussical,” “Big Bad,” “Dirty Laundry,” and “Beauty and the Beast.”

Doing this, he said, seemed natural for how he and his friends fit their personalities to the different characters.

And while this will be his last play, he said the experiences have helped with his determination and called his acting experience “wonderfully weird.”

Emelia Jacobs, a junior at Alden-Conger, plays the fairy godmother. She admitted staying on beat with dance moves was challenging, which is why she practiced so much.

Throughout her work, she has also learned the significance of every role, whether on stage, providing tech support or doing set work.

“I love doing plays,” she said. “They are so fun to do. I’ve really enjoyed all the friends I’ve made and the fun experiences I’ve been a part of throughout the years.”

Jackson Frank is a 10th grader and will play a member of a mob of villagers, as well as Thelonious. Despite only having a small role, he was excited for it.

Through the experience, Frank said he learned just how many good singers and confident actors Alden-Conger had.

Besides serving as director, Theusch is the vocal music director for grades K-12, and has been with the district for 16 years. This is her 13th year directing the Alden-Conger musical.

“My love of theater started in middle school and grew in high school where I played Nellie in ‘South Pacific,’ Kim in ‘Bye Bye Birdie’ and Lady Larkin in ‘Once Upon a Mattress,’” Theusch said.

“Shrek the Musical” will be presented at 7 p.m. Friday and Saturday and 2 p.m. Sunday at Alden-Conger school, at 215 N. Broadway Ave. in Alden. Tickets are $6 for adults and $4 for students and senior citizens, with doors opening 30 minutes before curtain time. There are no pre-sales.