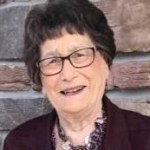 Memorial Services will be held at Boldt Funeral Home, Faribault, on Saturday, April 9, 2022, at 2:00 p.m. with the Reverend Greg Ciesluk officiating. Visitation will be one hour prior to the service at the funeral home on April 9, 2022.

Evelyn was born November 9,1924, in Montevideo, Minnesota, to Albert H. Wegner and Mary Gould Wegner. She grew up in Maynard and Lamberton until her family moved to Frontenac, MN, where her parents became the caretakers of the Methodist Campus, a church youth camp. Evelyn graduated from Lake City High School. On October 30,1943, she married Vernon L. Haase at Camp Crowder, Joplin, Missouri. Shortly after their marriage began Vernon was stationed overseas for 18 months during the war. Evelyn remained in Lake City where their first child, Ronald, was born. When Vernon returned from overseas in 1945, they continued to live in Lake City, and welcomed their second child, Moni.

The family moved to Faribault in 1948. Evelyn was active in the United Methodist Church and Mrs. Jaycees. A third child, Brad, was born in Faribault. In 1970, they moved to Albert Lea. Both Evelyn and Vernon took up golfing and enjoyed many years as members of Green Lea Golf Course. Their last residence in Albert Lea was adjacent to the golf course, and when they weren’t golfing themselves, they spent many hours on their deck watching others play.

In February 2015, they returned to Faribault to reside at Faribault Senior Living. Vernon passed away a few weeks after that move, and Evelyn remained in her apartment at FSL until her death.

Evelyn was preceded in death by her husband, her parents, and a brother, Marvin Wegner.

The family would like to express their appreciation to the staff at Faribault Senior Living for the care, compassion and friendship extended to Evelyn. Thank you also to Brighton Hospice for their part in her comfort care.