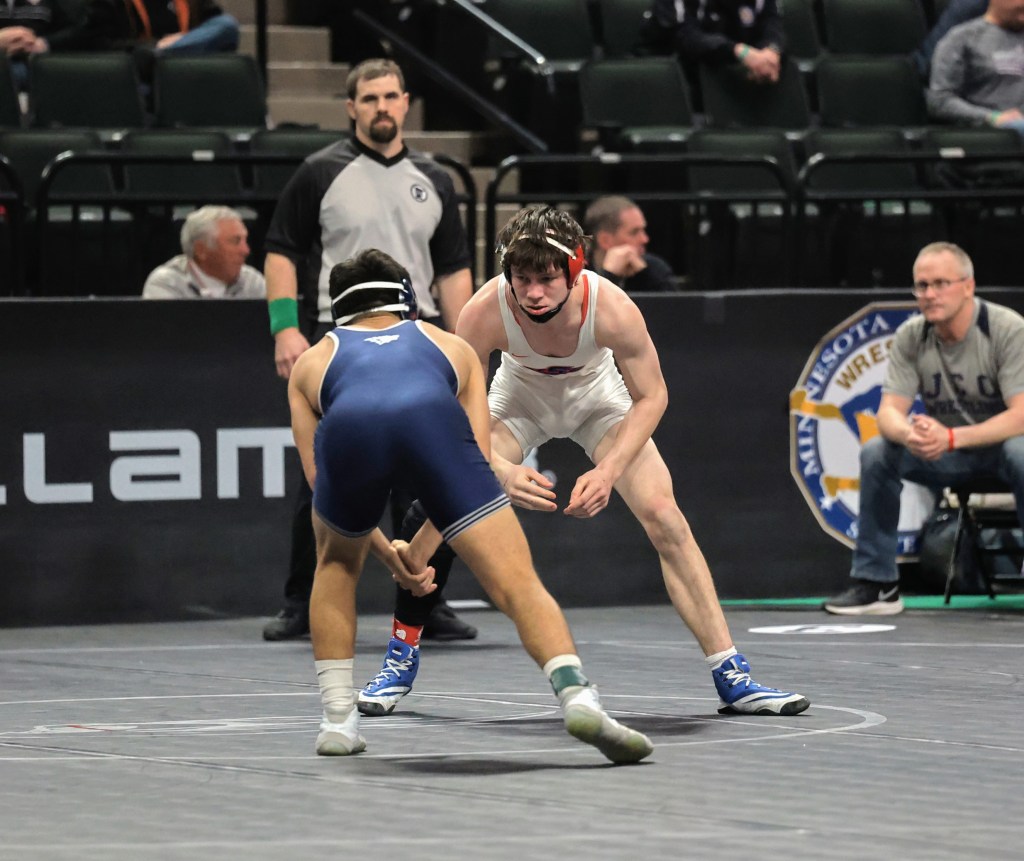 In their first year as a coop team, Maple River/United South Central accomplished some big feats throughout the season, culminating in seven wrestlers earning individual trips to state and a team tournament appearance.

After a first round elimination from the team tournament to the eventual state champions on Thursday, the seven individuals stepped onto the mat to compete for school history.

First up was freshman Wyatt Walters at 106 pounds, who fell victim to a first-period fall in his opening match. In his first consolation match Walters came up short in a 9-0 major decision. He ends his season with a 37-14 overall record.

Sophomore Braxton Simon competed in the 120-pound weight class and also lost in a first-period pinfall in his opening round match. However, unlike Walters, Simon did not receive a wrestleback, ending his season with a 33-20 record.

At 126 pounds, senior Ethan Elvebak lost in a first-period fall in the first round and then again in a 11-3 major decision in his consolation wrestleback. He ends his season with a 29-16 record.

Boden Simon wrestler at 132 pounds and was the first MR/USC wrestler to win his first-round match, winning in a 7-0 decision. Simon then lost his second round match in a 6-1 decision, sending him to the consolation bracket where he won his first match in a tight 4-3 decision. Simon’s tournament run came to an end in the second round of consolations where he fell in a 6-2 decision. His record this season finished at 45-6.

Senior Ethan Evenson competed at 145 pounds, dropping both of his first two matches, a 12-4 major decision in the first round and a 4-2 decision in the consolations. Evanson’s record finishes at 41-8.

Senior Konner Harpestad also won his first-round match, competing at 152 pounds. Harpestad won a 4-0 decision before falling in a 9-2 decision in the second round and then a 8-5 decision in the consolations. He ends his season with a 37-14 record.

Finally was junior Cooper Ochsendorf, who wrestled at 160 pounds and came up short in a 2-0 decision in his first-round match and did not receive a wrestleback opportunity. He ends his season with a 44-6 record.

The MR/USC team has set the bar high for expectations heading into the offseason and preparing for next season.