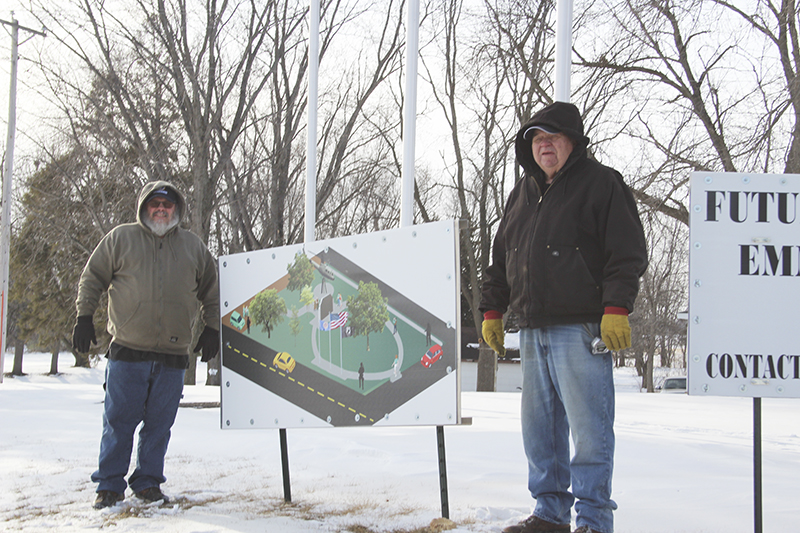 Clair Dagestad, left, and Larry Rasmusson stand in front of a drawing of the veterans memorial in Emmons. Behind them are the three flagpoles, which have already been installed. Alex Guerrero/Albert Lea Tribune

Progress is being made at the new Emmons Veterans Memorial, a project that started two years and has been under construction for a few months.

“We just had to go through all the paperwork to get to that level,” said Clair Dagestad, president of the Emmons Veterans Memorial Committee. “We had to get the land and all of this other stuff. That took awhile.”

Other than paperwork, he said things have gone well and that there has been good response.

“The community has helped us with whatever we’ve asked,” he said. “We’ve had a lot of support [and]  volunteers.”

When completed, Dagestad hopes the monument will create pride in the community and its service members.

“[Community members] got together one day and we talked about it for a few years,” he said. “And then all of a sudden we decided, ‘You know what, we’re going to put a committee together and see where it goes.’”

Currently three flag poles with the United States, the Minnesota and the POW flags are the only things at the site.

“Hopefully we get the silhouettes up and the monument this year yet this summer, 2022,” Larry Rasmusson said. “Then after that whenever the helicopter … it’ll probably be another year or so after that.”

After that will come concrete, and Rasmusson estimated the entire project would take at least two more years.

The reason it’s taking so long, according to Dagestad and Rasmusson, is because of the granite monument, which will take roughly a year. The granite stone was ordered last September.

“We’re kind of expecting that in the mid-summer,” he said.

Another problem was purchasing the land, itself a two-year project.

When completed, the memorial will have a monument in the center with a helicopter static display in another corner. It will also include silhouettes of service members from the four branches of the service at different corners of the park. World War II veterans, all 185 of them, will be on one side of the monument. The other side of the stone will have the names of veterans from Vietnam, Korea and any other conflicts including Desert Storm and Afghanistan.

Rasmusson hypothesized there being a fundraiser during the next Veterans Day in November.

Neither Dagestad or Rasmusson provided a cost estimate.