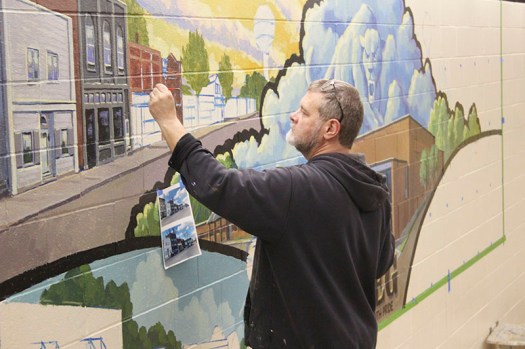 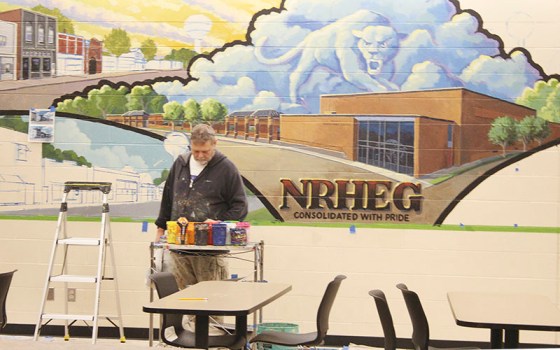 Greg Preslicka is hard at work at NRHEG School this week on a new mural in the lower commons. Alex Guerrero/Albert Lea Tribune

A draft of Greg Preslicka's mural, which went up at NRHEG this week in the cafeteria, showcases images of the downtowns of each of the four communities that make up the district. Alex Guerrero/Albert Lea Tribune 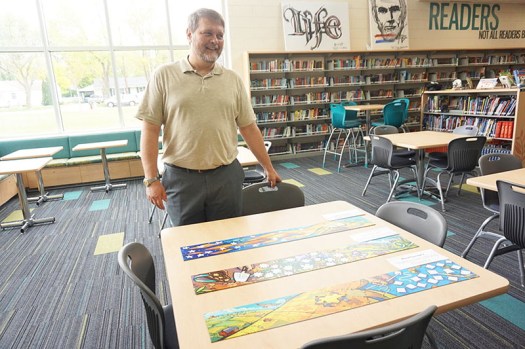 Artist Greg Preslicka has been all over Minnesota, including to I.J. Holton Intermediate School in Austin. Here, he shows drafts of some of his previous murals. Provided 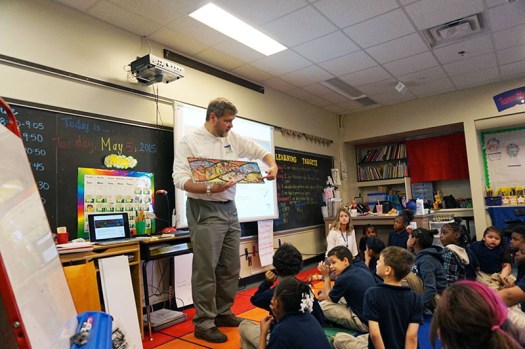 Artist Greg Preslicka talks to students about one of his murals at Bethune Community School in Minneapolis. Provided

The lower commons in the high school at NRHEG School received a makeover this week thanks to local muralist Greg Preslicka.

It’s thanks to his wife, Heidi.

“She solicits for me,” Preslicka said.

Staff at NRHEG had approached Cynthia Gail, the district’s art teacher, for a few years about doing a mural, something she admitted she had no interest in doing. But last fall, she started working on a grant with a grant writer Superintendent Michael Meihak brought in, and she in turn hired Preslicka.

“Not only was his work impressive but also the titles of his work,” she said. “‘Communities and People,’ ‘Reading Opens New Worlds,’ ‘Celebrating Diversity,’ ‘Be a Beacon,’ and ‘Fun and Successful Kids.’“

The latex mural is 22 feet 8 inches by 6 feet 8 inches, and his work at NRHEG depicts the different downtowns of the towns that comprise the district. The towns are in the four corners of the mural, while in the center is the school with clouds rising above it. Depicted in the clouds is a panther, the school mascot.

“[The school] really wanted to show the unity of the community coming together for the school,” he said. “That’s why the school is in the center and the communities kind of surround it.”

While he worked, different classes stopped by to ask questions.

“My background is in graphic design and illustration,” said Preslicka, who has been painting murals for 13 years. “I’ve done that for over 30 years.”

But about 13 years ago he started painting in his child’s bedroom.

“My wife thought that maybe other people would like to have that same kind of thing,” he said.

After doing that, his hobby led him to an opportunity at the YMCA, specifically a large gym in Burnsville.

“Once I started doing that, that led to more large projects and I stopped doing the smaller bedroom kind of stuff. Just more larger, municipal, more community roles.”

In fact, he estimated he has painted in six or seven YMCAs around the state. Besides the gyms, he has also done product designs for General Mills, Betty Crocker, Nabisco and Dairy Queen. He has worked for game companies in package designing, and he also designs and invents tabletop board games

Preslicka worked on the mural at NRHEG this week in the lower commons.

“It was just about tying in our classes and tying them in with the community and having some sort of content that revolved around the history of the communities, the history of the school districts coming together and making sure that students are aware of how this all came to be as a consolidated district,” Meihak said.

Reid Sandry, a sixth grader at the school, was part of a group that helped, and said the mural was both what he expected and not exactly.

“I pictured there would be a panther and the school and all, but I wasn’t really sure on how the design would work,” he said.

“I kind of envisioned it being a panther in the middle,” he said. “I didn’t expect the school to be there, but I did expect the four corner towns.”