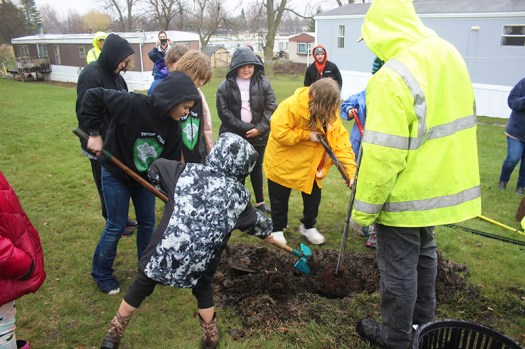 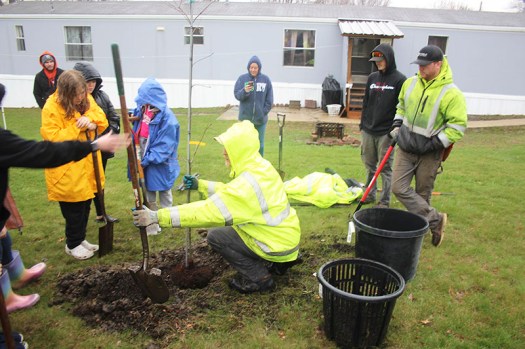 Scouts were handed shovels during the tree planting event in honor of Arbor Day. Their goal was to plant six trees at the park Friday. Alex Guerrero/Albert Lea Tribune 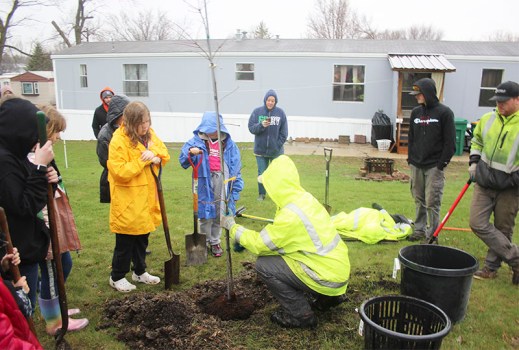 Members of the parks department for the city of Albert Lea show Scouts and their family members how to correctly plant a tree. Alex Guerrero/Albert Lea Tribune

Nelson and her troop of seven have been working with Grossman to find an appropriate area to plant six trees.

“My troop, we were looking for a good project to give back to the community and to also do something for Girls Scouts,” she said. “Girl Scouts is about community service, and there’s a program through Girl Scouts U.S.A. called the Girl Scout Tree Promise.”

The tree promise, which started in April 2021, is the organization’s goal of planting, protecting and honoring 5 million trees by 2026. The organization is joined by the Elliott Wildlife Values Project, American Forests and SciStarter. According to a Girl Scout tool kit, 5 million trees can provide habitat for wildlife and capture and store over 2 million metric tons of carbon dioxide over 50 years. And that’s equivalent to taking 425,000 cars off the road for a year, eliminating annual carbon emissions from 239,000 homes or not charging 255 billion smartphones. Five million trees also remove 1.6 million pounds of air pollutants, and 5 million trees can capture, store and filter 1.5 billion gallons of water each year.

Nelson herself remembered doing something like this when she was in college, and said it was fun to be out in nature and knowing she was protecting habitat for wildlife.

“We’re just helping to give back to the city, adding some beauty and some shade into a park,” she said. “We’re also showing that the youth are really invested in Arbor Day and helping the environment

Nelson decided on Friday because Albert Lea is designated a tree city.

According to Grossman, trees included white oak, locust, American elm and Ohio buckeye, among others.

“I think it’s great,” he said. “We try and work with a group in late spring every year and do a little Arbor Day planting.”

Besides earning badges and being fed, there was another reason for doing this: Girls in the troop had already done school-related projects for Earth Day (last Friday), and it helped Albert Lea meet their requirements with Tree City USA.

“We try and plant around 200 trees per year,” he said. “That just helps us kind of kickstart the year. It gets the young people involved, and that’s what we need.”

This was the first time Nelson’s troop planted trees, which were purchased through a combination of donations and cookie sale profits.

“We appreciate it,” Grossman said. “We want them to learn about the environment, Earth Day, Arbor Day, so when they get older and are adults, and they can continue the planting heritage and taking care of our environment.”

Kinley Studier, a fourth-grade Scout, said the troop decided doing this would be a fun project.

Fellow Scout Paisley Hantelman was excited to plant despite the weather, but she also wanted to thank Nelson for helping set the project up.