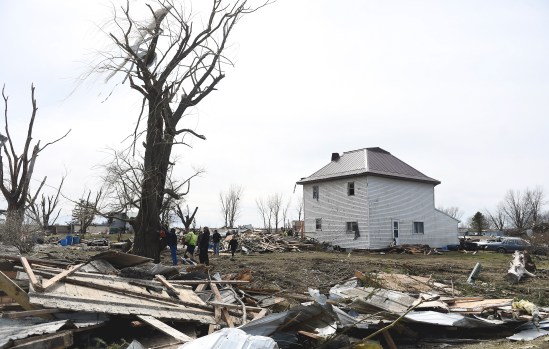 Clean-up efforts in Taopi have already made good progress since the EF2 tornado hit the community Tuesday night. Officials are hoping to have clean-up of down trees and branches completed by Tuesday or Wednesday. Eric Johnson/photodesk@austindailyherald.com 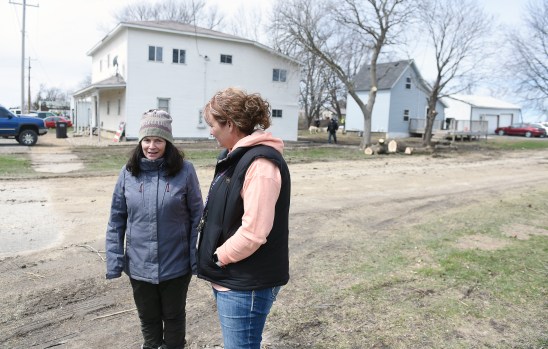 A large wood chipper is parked near a large pile of wood gathered from clean-up efforts Friday in Taopi. Eric Johnson@austindailyherald.com

TAOPI — Just days after an EF2 tornado tore through Taopi Tuesday night, the town already has taken major strides to try and reach some sort of normal.

Tuesday night’s storm cut a wide swath through the community’s west edge destroying 10 homes total, causing damages to others and downing trees all about town. However, the town already looks different, a sign of the hope displayed by its residents.

Yards and properties choken with material from homes and trees Wednesday morning were now cleared and more open.

“The landscaping is changing,” said Taopi Mayor Mary Huntley during a media briefing Friday afternoon. “Everything is changing. Mountains of trees piling up is progress for us.”

While the damage wrought by the tornado that sustained winds of around 130 mph was devastating, Huntley said that the community has shown resilience and its people are “anxious” to get on with the rebuilding of the community.

“I think people are feeling pretty good. Optimistic,” she said. “There’s a lot of grief here, but we’re very hopeful because we know we’re going to recover from this.”

Mower County Emergency Management Director Amy Lammey said Friday that clean-up efforts remain focused on cleaning up the down trees left by the tornado. Two large piles were visible on the west edge of Taopi with a large wood chipper waiting to start breaking down the trees.

She said the hope is to have that part of the clean-up completed by Tuesday or Wednesday of next week, which will be followed by the clearing of other debris left behind.

Despite the monumental work left ahead of residents, the hope of moving forward is sustained in part by the outpouring of support shown by the communities in Mower County as well as communities from outside of the area.

One such example was Baudoin Oil Company, which has been coming in each day to fill up generators, chainsaws and more, with funding coming from outside sources.

“We are just so grateful,” Huntley said. “No matter where you came from, we are grateful.”

Lammey said that it’s too early to determine total damage estimates, but indicated that the threshold of around $82,000 had been met to receive state funding in order to get Taopi’s infrastructure back on track.

But she cautioned: “We’re still in the early stages of damage assessment.”

The task of total recovery is still a long ways off, but already Huntley said the town is looking forward to brighter days.

“At the end of this, we are going to have a celebration,” Huntley said beaming. “I want people to understand that even through all of this there has been demonstrated so much hope, so much good.”

Those who wish to help can give to a relief fund at the United Farmers State Bank of Adams.