First Ward Albert Lea City Councilor Rich Murray this week announced he will throw his hat in the ring to become the next Albert Lea mayor. 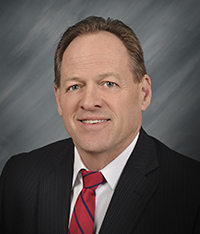 Murray, who has served for six years on the council, said he decided to run for the position after careful consideration and talking with his family, friends and a few other residents and business people in town and receiving encouragement to do so.

“I’ve always been very active in the community,” Murray said. “This is part of who I am and just what I do, what I thrive on. Some people like to golf, I like to get involved in things in the community.”

He said he was going to have to run for reelection either way this year because of the redistricting of wards 1 and 2, but decided to shift his focus from the council seat to the mayoral seat after Mayor Vern Rasmussen Jr. announced he would not seek reelection.

“I think I can make a difference to this community,” Murray said.

Murray served in the Minnesota House of Representatives from 2011 to 2013 and has served on several nonprofit boards throughout the years, including the Salvation Army, Albert Lea Family Y and Riverland Community College. He has worked at ISC Financial Advisors since 1987 and became owner about 10 years ago.

With a financial advising background, Murray said he understands finances well. He said finances will be one of the top concerns for the community over the next couple years considering increases in inflation.

He said he would not raise taxes dramatically, noting the city can’t put more of a tax burden on the citizens of the community. Many are already feeling the effects of inflation with food and gas prices, and there needs to be a way to alleviate that problem.

He referenced many good projects and initiatives in the works in the city and said there have been several good things that have come out of the past five or six years.

He has been out visiting with various businesses in the community over the last six months with Albert Lea Economic Development Agency Executive Director Phillip Johnson to see how their businesses are doing and what their needs are. They have found a lot of business owners who have said they would like to grow but need help finding employees and finding housing for those employees.

“There’s several obstacles to our employers growing more,” Murray said, noting these are things ALEDA, the city and others can try to alleviate.

He referenced the two big housing projects in the works at the former MarketPlace Foods building and the Unique Opportunities LLC apartments off of Front Street. Between those two projects alone, 100 new units will be added to the city’s housing stock, which will help bring options and choices to the market, he said.

“It’s going to allow people who are now driving to Albert Lea for work, a place to rent, a place to stay,” he said.

Despite these new developments, the most recent housing study has shown the need for an additional 300 to 400 units in Albert Lea of apartments, condominiums and single family homes, he said. That was even assuming that the city was going to lose 1% of its population.

He said with the projects that are being worked on with ALEDA, there could be some growth in population and jobs. Several existing businesses are looking to add a handful of jobs each, for an estimated 100 employees in total. Adding that in with some of the new businesses such as Vortex Cold Storage, that is adding about 30 employees, Infinite Recycled Technologies with about 25 employees and a third business that is likely coming to the spec building off of Margaretha Avenue with another 30 jobs.

He said businesses also need help with training and said partnerships with the city, ALEDA, Riverland Community College and the high school can help address some of these needs.

Despite knowing there have been many successes in Albert Lea in recent years, he acknowledges that sometimes people complain to him about things in the city. When this happens, he said he likes to ask those people how they are getting involved and how they can help.

“Everybody’s got to have a part in this,” Murray said. “If we’re going to grow this community and make it better, everyone needs to be a part of it. We need their ideas, their input — just participating.”

He said Albert Lea leaders need to make sure people know of all of the events happening in the community and get people to enjoy them. He also noted all of the nice amenities that Albert Lea has that many other communities don’t have and said if people have ideas for new events or amenities, they should share their ideas and help make them a reality.

One of the things the COVID-19 pandemic has taught is that many people can work from a different location than where they live. He said the city is a great place where people can live and work remotely, with lower cost of living, lower crime and many opportunities.

“I’m excited about the future of this community,” Murray said. “I think with everybody pulling together and just trying to help out here, we can do some exciting things.

“Everything is not going to be easy, but if you can get everybody working together, I think we can do that.”

He said he plans on getting out and door knocking throughout the community and encouraged people to talk with him about their ideas if they see him out and about.