Dean Carroll Holst, age 91, died Monday, May 16th, 2022 at UHD Hospital in Blue Earth, MN. Services are to be held at a later date. Nasinec Funeral Home in Wells is entrusted with arrangements. Please see www.nasinecfh.com to leave online condolences. 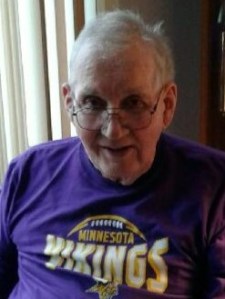 Dean Holst was born June 18th, 1930 in Forest City, Iowa to James and Viva (Oshiem) Holst. He attended school in Forest City and Thompson, Iowa. After high school Dean served in the U.S. Navy for four years during the Korean conflict and was honorably discharged in 1955. Dean attended Dunwoody Institute in Minneapolis, MN and graduated as a tool and die maker in 1971. He was employed as a tool and die maker for Winnebago Industries, Iowa Mold & Tool, and Country Home & Machine before retiring in 1992. Dean was united in marriage to Priscilla Mutschler April 20th, 1985. During his life Dean farmed in the Thompson and Lake Mills area. He served as Commander of the Kiester American Legion Post #454 for two years. He belonged to Grace United Methodist Church in Kiester, MN and enjoyed fishing and bowling. He bowled in the ABC National Tournament for over 30 years. Dean also enjoyed traveling and going to his Navy Reunions.

Dean is survived by his wife Priscilla; his step-daughters Beverly (Brad) Scherb, Janice Leasure, Nona Luecht and Darla Roberts; Eight step-grandchildren and many, many great grandchildren; Two brothers Don Holst of Lake Mills, IA, and Gary (Mariann) Holst of Leland, IA; and many nieces and nephews and their families.

Dean is preceded in death by his father and mother, James and Viv; One sister-in-law, a granddaughter and a great grandson, and two brothers Ralph and Mark Holst.