A Freeborn County Sheriff’s Office deputy who ran for sheriff in 2014 said he wants to try for the seat again because he thinks he can bring positive change to the department. 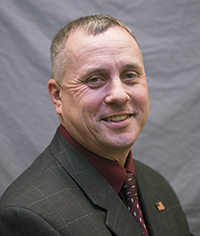 Dale Glazier, 58, has worked for the Sheriff’s Office for almost 19 years and before that worked in ag diesel mechanics.

“I do see what it’s like on the other end of the world,” Glazier said, referencing his time before he entered law enforcement. He said having a career outside of law enforcement for the first half of his adulthood helps him understand and relate to people out in the community.

He said he also knows what it’s like to be a victim, as his house was broken into in 2006. Having experienced something like that, he said, helps him to be more sympathetic with the people he serves.

Glazier, who lives northeast of Albert Lea and was originally from Wells, said he had always wanted to be in law enforcement right after high school but at that time was talked out of it. After working at several different places that each went out of business, one day he decided he was going to go after his longtime dream and go back to school for law enforcement.

“I love it,” he said of his job. “I love the people. I love helping people, and I love being out and about.”

When Glazier ran previously for the position against current Sheriff Kurt Freitag and former Sheriff Bob Kindler, he was only about 120 votes shy of advancing to the primary.

In the years since, he said he has garnered more support and said he has been encouraged by many to run for the seat.

“Being sheriff is something I’ve always thought of and wanted,” he said.

When asked what sets him apart from other candidates, Glazier said he thinks his life experience in and out of law enforcement gives him a rounded perspective.

He also credited his ability to remain calm and to be fair and consistent. He noted he has gained respect even from the people he has arrested or cited through the years because of his ability to do so.

This priority would continue into the workplace with co-workers and other employees and said he wants people to know he is approachable.

Glazier said if he is elected, the biggest thing that needs to be done right away is to fix the morale and manpower issues taking place in the department.

“One is related to the other,” he said.

The department is three short on patrol, which forces the deputies to have to work overtime and bounce around in different shifts. He wants to bring more stability to these concerns and unify the department.

He said he will be mindful of the county’s money but support purchases of things that are needed for the department.

Glazier and his wife, Brenda, have been married for 38 years and are helping raise their great-nephew and great-niece.

The filing period continues through the end of the month.

So far, Glazier will face off against Sgt. Tim Bennett with the Sheriff’s Office and longtime Albert Lea police Lt. Jeff Strom.