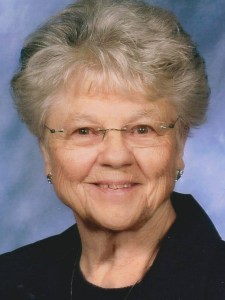 Harriet was born on March 4, 1930, in Albert Lea to Eddie and Margaret (Callahan) Anderson. She graduated from Ellendale High School in 1948 and worked at the Register of Deeds Office at the Steele County Courthouse in Owatonna.

During her senior year in high school, she met Floyd Harne, the love of her life, at the local roller rink. The two wed on September 10, 1950. Soon after, Floyd was drafted, and the newlyweds moved to Kentucky for his training at Ft. Knox. Floyd then deployed to Germany in 1952, and Harriet moved back to the Ellendale farm to live with her parents. In 1953, while Floyd was in Germany, Harriet gave birth to their first child, Lyle.

When Floyd returned from his deployment in 1954, the couple moved to Albert Lea, and bought their forever home in 1957. The small family soon grew with Chuck, Roxanne, Rhonda, and Brad. After Brad began school, Harriet found herself wanting to return to work outside of the home and began cleaning houses in the mornings. In 1972, she began working for the Albert Lea school district as a secretary, a position she would hold for 23 years until her retirement in 1995.

God, family, and friends were Harriet’s world. Grace Lutheran Church was important to her life. Her grandchildren and great-grandchildren were especially important in her life, and she attended as many of their functions as she could. She enjoyed weekly coffee parties with neighborhood friends. Many miles were spent walking around Fountain Lake with church friends, many days ending at McDonald’s for coffee. She and Floyd were in card club, plus Harriet at one time belonged to three bridge clubs.

Holiday baking brought great joy to Harriet. She would begin creating her assortment of cookies, breads, bars, and candy in October so they would be ready to give to her loved ones by Christmas. She loved to scrapbook and made a special one for each of her grandkids. She liked to research her heritage and even created a book about her life. She always had a camera with her and took copious amounts of pictures of her family and friends.

Preceding her in death were here husband, Floyd; her son, Chuck; her infant son, David; her daughter-in-law, Vickie; her sister and brother-in-law, Rose and Alan; and her infant brother, Lyle.

A visitation will be held from 5:00-7:00 p.m. on Thursday, June 23, 2022, at Bonnerup Funeral Service, as well as one hour prior to funeral services. Funeral services will begin at 11:00 a.m. on Friday, June 24, 2022, at Grace Lutheran Church with Pastor Dean Smith officiating. Interment will follow at Lakewood Cemetery. Memorial contributions may be made in Harriet’s name to Grace Lutheran Church’s Food for Backpack Program.