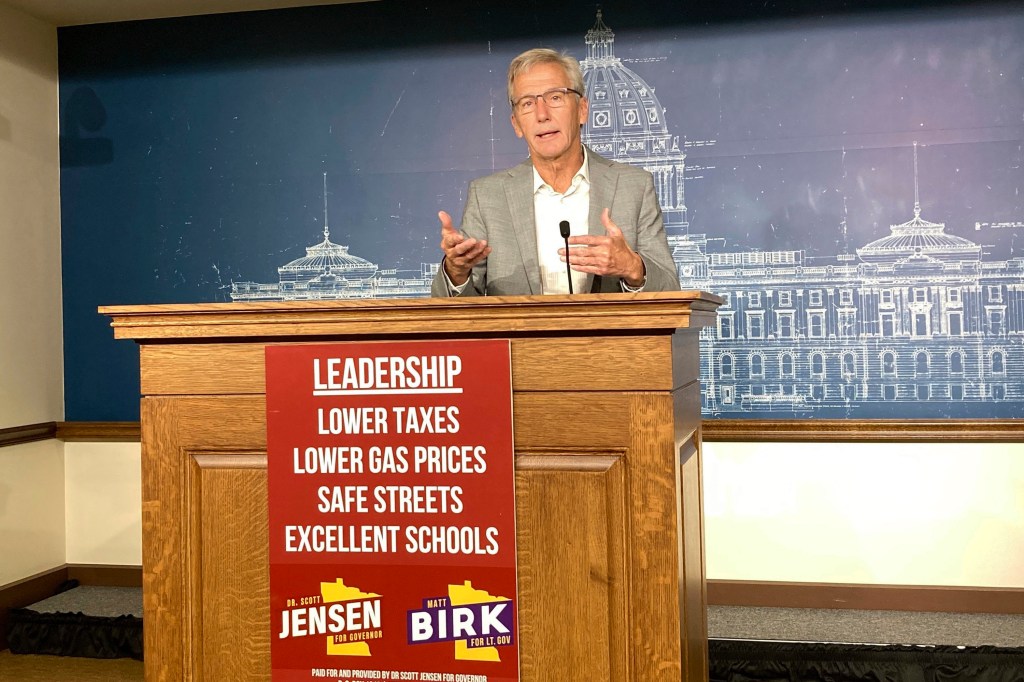 Republican gubernatorial candidate Scott Jensen speaks to reporters on Thursday at the Minnesota Capitol in St. Paul, where he called for tax cuts and a clampdown on government spending and regulations to help Minnesotans cope with inflation. Though his plan was short on specifics on how he'd get there, Jensen said his goal is to return around $4,000 to $5,000 for every family of four. AP Photo/Steve Karnowski

Inflation is already dominating election campaigns nationwide. Republicans see it as a potent issue for trying to build up their ranks at the Minnesota Capitol and other statehouses across the country, as well as in Congress.

“We need to put more money in the pocketbooks and the checkbooks of everyday Minnesotans now,” Jensen said at a news conference.

Democratic Gov. Tim Walz a day earlier renewed his call for legislators to approve one-time tax rebate checks of $1,000 for individual filers and $2,000 for couples to return part of the state’s remaining $7 billion budget surplus to taxpayers to help them cope with high gas and other prices.

That got Walz a shout-out Wednesday from President Joe Biden, who called on other state and local governments to take similar actions as he proposed a federal gas tax holiday. But Republican legislative leaders once again dismissed the rebate proposal as an election-year gimmick and maintained their calls for permanent tax cuts. Chances for a special session to approve any changes remain dim.

Jensen criticized the governor’s plan as “pandering” because he’d send checks to all Minnesotans whether they paid taxes that contributed to the surplus or not. He called for an eventual phase-out of the state’s personal income tax. He also backed a GOP push to eliminate state income taxes on Social Security benefits, which are already exempt for many lower- and middle-income Minnesotans.

Though his plan was short on specifics on how he’d get there, Jensen said his goal is to return around $4,000 to $5,000 for every family of four, and that his plan might include some kind of one-time, up-front payment along with permanent cuts.

Jensen, a family practice physician and former state senator from Chaska, has been moving beyond the vaccine skepticism and opposition to Walz’s handling of the COVID-19 pandemic that helped him secure the GOP endorsement, and has been talking up public safety and economics in recent weeks.

He previously proposed suspending the state’s 28.6 cents-per-gallon gas tax. Walz hasn’t ruled out a gas tax holiday, but the idea didn’t catch on before the Legislature adjourned its regular session last month, and the governor has called his rebate proposal a more effective alternative.

Governors can’t do much to reduce inflation, which is a problem of the national economy, but Jensen said the state can help cut people’s costs. He didn’t have many specifics for how to address the big hole that eliminating the personal income tax would blow in the state budget. But he said he wants to get that conversation going.

“If we can’t have that conversation, we’re never going to solve the problem with big, bold ideas,” Jensen said.

Creating a “sizzling economy” could help, Jensen said, along with “dramatically reducing” state expenditures. Eliminating waste, fraud and abuse could make a “huge dent,” he added, citing the cost overruns with the troubled Southwest Light Rail project and state driver’s licensing system as examples, along with fraud that’s been exposed in day care and food bank programs.

“I think the only way you get to innovative, effective solutions is you have to throw everything out on the table,” said Jensen’s running mate, former Minnesota Viking Matt Birk. And he quipped, “Scott and I both, we both have a lot of great ideas that stink.”

Walz announces plan to give $4 billion of state’s…