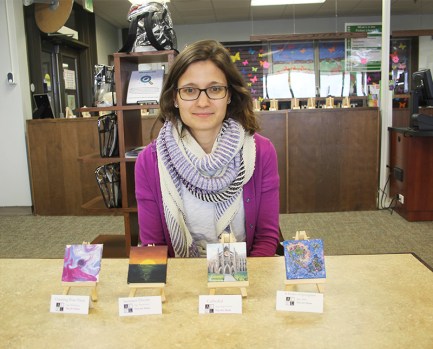 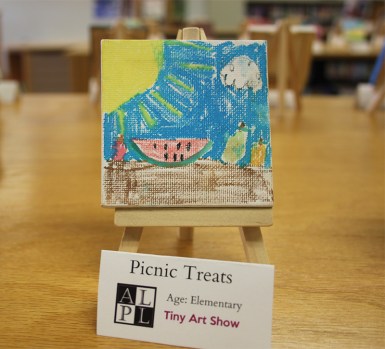 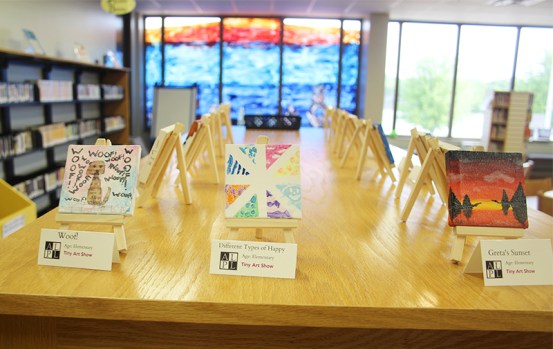 Sevett was inspired to try the art show hearing about similar events at other libraries. Alex Guerrero/Albert Lea Tribune

New artwork has been featured around the Albert Lea Public Library since Tuesday. That artwork has included paintings, collages, abstract works and literal works.

“We have a tiny art show going on in the library,” said Library Director Annice Sevett in explaining the artwork.

Sevett said the purpose of the show is to give community members ways to be creative and display their talents without big investments in a canvas or art supplies.

“It’s also something that we could do to involve all ages,” she said, noting there were artists as young as preschool age.

This is the first time the library has held a tiny art show, and Sevett said she was inspired to do this by seeing other libraries across the country hold shows.

“We thought it would be interesting and fun to try,” she said. “We got a positive response from the community.”

In total, 62 pieces were submitted for the show, and her goal for doing this is to display local talent and said anybody could decorate a 3-by-3-inch canvas. Artists were also given a wood easel to put their work on. Each artist was allowed one canvas, art had to be appropriate for display to a wide audience and anyone was allowed to participate. They were allowed to decorate their canvas with any medium they wanted, and artists didn’t have to live in Freeborn County to participate.

“To see the wide range of things that people in the community decided to do with their canvas,” she said. “It’s really interesting to see the mediums that they used, the ideas on the canvas. And then just to see different ages and the artists.”

To participate in the exhibit, people had to request a canvas. Calls for submissions went out at the start of May and were due by last Sunday. Artists were allowed to use any medium they desired to decorate the canvas. Art work is displayed in the fiction library as well as the children’s library, and will remain on display through Sunday.

Sevett said she was surprised by the variety of ideas and imaginations of artists.

“Even from preschool all the way to adult you have a wide age range, but the interpretation of what people did on their canvas to the title that they named it was really interesting to see,” she said. “We gave no direction, there was no theme. People [that] participated could do whatever they wanted with their canvas.”

She said there were a lot of talented artists in Freeborn County, but said putting an idea on such a tiny medium could be hard.

Because the event is for fun, no awards will be handed out.

“People interpret art in so many different ways that there was no way that we’d be able to say this was the best or this one was a favorite of people that came and viewed,” she said. “We wanted people to feel comfortable putting on the canvas what they wanted to put on without feeling like they were having to be judged for it.”

She said there was a good response from people picking up canvases and that they were excited to participate.

“When they brought them back they were really proud of what they did and we’ve gotten a lot of comments that they had a lot of fun participating,” she said.

According to Sevett, visitors to the library who weren’t aware of the show were surprised by the quality of work on display. Her staff has also been surprised by the talent and interpretations people took with their works.

For people who can’t get there this week, a video of the collection is posted on the library’s YouTube channel. Sevett said they might do something like this again in the future.

Artists who participated can pick up their work Monday to June 12. Any piece not claimed will eventually be discarded.