An Albert Lea man who ran for the Ward 6 City Council seat in 2018 is giving it another try. 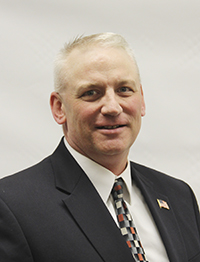 Nick Ronnenberg, an appraiser for the Freeborn County Assessor’s Office, will face off against challengers Carmen McColley and Brian Anderson in the Aug. 9 primary.

Ronnenberg previously ran against longtime 6th Ward Councilor Al “Minnow” Brooks, but Brooks this go-around did not file for reelection.

“I still feel like I am the right candidate, the right person to have on the council to help with especially Ward 6 but also what’s going on in the city,” he said. “My goal would be to work together with not only the people in my ward but with everybody. I think I can do a really good job at that.”

Ronnenberg said safety is one of his top priorities, noting his ward has several uncontrolled intersections, and some streets have no sidewalks. He questioned whether some issues could be resolved with signage.

He said he does not have a personal agenda in running for office and feels like he has the ability to get things accomplished.

“I know I can get things done,” he said. “I know how to reach out to the community and what to do with their feedback.”

He understands the need to listen to all sides before making a decision and said he recognizes the importance of not just listening to constituents but in communicating with them and following through.

“Communication is a huge piece. … he said. “One of my commitments is to follow up and follow through. I never want anybody to say I never got back to them.”

Another goal is to work with the current council members and leadership to continue to move Albert Lea forward. He said Albert Lea has been moving in a good direction for several years now.

“We’re doing a lot of good things,” he said, referencing one example of the new program the city has implemented for a sanitary sewer and water service line protection program.

He also said in the last decade, there have been a lot more things happening with growth in the community.

Prior to joining the Assessor’s Office in June 2021, Ronnenberg worked as a detention deputy in the Freeborn County jail for five years and prior to that was a banker for 11 years. He spent 22 years in active and reserve duty in the U.S. Army, retiring in 2012.