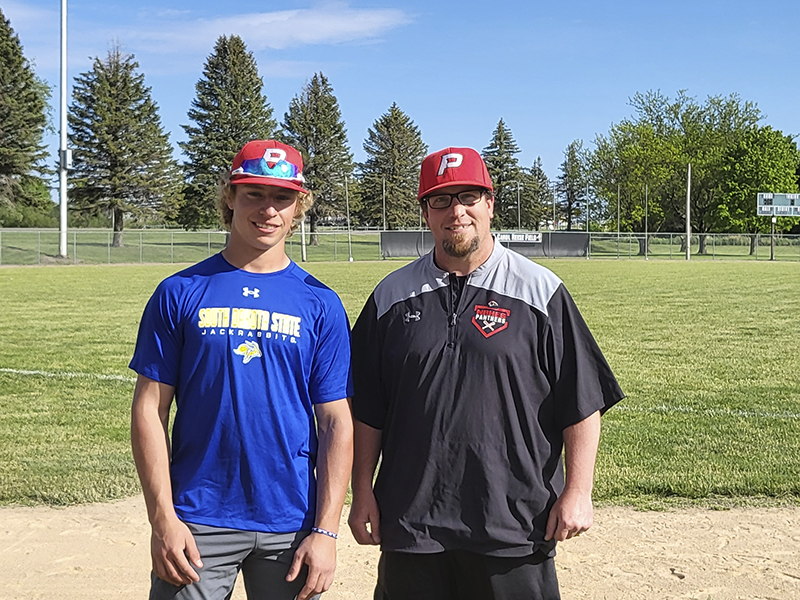 By James Sanchez, For the Tribune

Andrew Phillips of NRHEG High School has accepted a scholarship to become a center fielder for the South Dakota State Jack Rabbits.

Phillips said it all started in Albert Lea at coach-pitch. Young Phillips went up to the plate, and with one of his first at-bats, hit an inside the field home run.

“So that was pretty cool!” he said. “I realized I had some special talent and could make something out of it.”

Although he had some natural talent to begin with, he said he still had to work on other aspects of the game, such as throwing accuracy, which eventually led to his transition to becoming a center fielder.

He gave credit to his father, Aaron Phillips, for dedicating a lot of time and effort into hitting “fly balls over and over again,” which developed his ability to “get a good break on the ball.”

Andrew Phillips stated that, as he continued to develop, so did his opportunities, but it wasn’t just him who invested in this. He said his parents, Aaron and Jeanette Phillips, decided to make a transition to the Hartland area during his eighth-grade year in school for him to be further supported by family members. 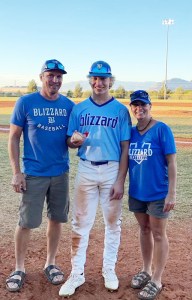 Andrew Phillips, center, was accepted on the Minnesota Blizzard baseball team at 15. Here he is with parents Aaron and Jeanette Phillips. Provided

He said one of the biggest opportunities he had was to try out for the Minnesota Blizzard baseball team. At the young age of 14, he tried out, however, was not accepted onto the team. He decided this would not deter him and continued to cultivate his skillset, which included more fly balls with his father, weight and agility training and batting practices, while sharpening his natural gift of speed.

At the age of 15, due to a lot of hard work, dedication and resilience, he tried out again for the Minnesota Blizzard team and was accepted.

He gave credit to the Blizzard coaching staff and readily stated how amazing of an experience it was and continues to be for him. He understands that this was also part of his success.

All this hard work, dedication and resilience culminated into a random phone call he received on a Monday night, around 10 p.m.

He said he had just begun to wind down for the day when he had received a phone call from South Dakota State Assistant Head Coach Brian Grunzke.

At the end of the call, he remembers stating, “Um … thank you for the offer, but I have to talk to my parents about it first.”

He said he attempted to wake his parents up immediately after the phone call ended; however, they were asleep after a hard days’ work, so the attempt of conversation was not fruitful and needed to be held off until the next morning.

The conversation took place over breakfast while Andrew Phillips was eating pancakes.

While having a conversation with his parents, he said he had come to understand that the statement “the spot is mine if I want it” meant that the young man had been offered a scholarship.

Excited and understanding how profound a moment this was, Aaron Phillips stated to his son, “This is what you always wanted right? This is what you have been working so hard on, with the extra batting practices, the agility exercises, the traveling, the coaching … This has been your dream all along. This is an opportunity for you to see how all of your hard work will pay off. This is a Division 1 school that also happens to have been your first choice all along. Not many kids get an opportunity like this … call them back and say ‘yes,’ if you want it son.”

Later that morning, Andrew Phillips stated he texted his father, stating “Dad, it’s done. I got it!”

Shortly after, he followed up the text with a phone call. He described the phone call to his father in this way, “tears started to flow … it was just crying … that was pretty cool!”

While this moment culminated in this extraordinary experience, Andrew Phillips continues to be humble and gives thanks to everyone who invested in him and made it possible.

Whether it was his parents making a conscious decision to relocate to a new town that would further allow him to have a sense of community, the long hours of driving that his mother committed to games without missing a single one, his grandparents who rode along to his games as he first began to drive, or his sisters, Madeline, Morgan and Faith, who also went along on those rides, he said thank you.

He also thanked the coaches that started him off in T-ball in Albert Lea and said he was even thankful for the first year he was not accepted on the Minnesota Blizzard baseball team at 14.

He thanked the same Blizzard team that welcomed him onto the team at the age of 15, and all of his teammates on the NRHEG baseball team.

And above all else, sticking to his motto which is represented by Philippians 4:13, “I can do all things through Christ,” he said, “God, thank you.”