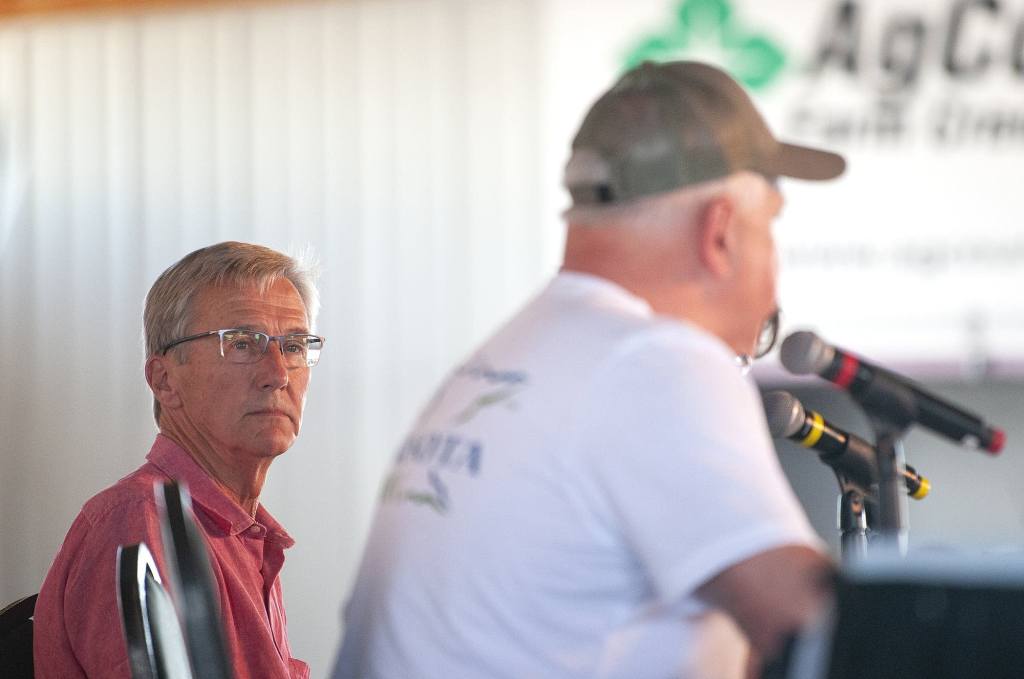 As it currently stands, a considerable surplus will be at the disposal of DFL Gov. Tim Walz or his Republican challenger Scott Jensen as the winner of their race crafts a two-year budget proposal for the Legislature to consider next year.

Tax revenue continues to outpace projections and much of a surplus that had topped $9 billion could be available as the budget-setting session convenes in January, because lawmakers failed to agree on how to use most of it.

And while the state’s finances haven’t gotten as much attention as candidate skirmishes over crime and abortion, the governor plays an instrumental role in tax and spending decisions at the Capitol.

During his term, Walz has enacted a mix of targeted tax cuts with more spending on schools, health programs and other key priorities. Jensen, a former state senator, says Minnesota’s government spends too much, and the time is now to scrap the tax code as we know it.

“We’re going to look hard at getting rid of the personal income tax,” Jensen told the Republican Party convention before nailing down the endorsement this May. “We have got to quit nibbling at the edges. We’ve got to be bold.”

It’s an idea he’s floated repeatedly without issuing a concrete plan for ditching the tax.

In June, he put some more-restrained tax measures in writing, saying he would seek tax cuts of at least $5,000 for every family of four in Minnesota and fully repeal the state’s tax on Social Security benefits. At a press conference where he repeated his desire to go further, Jensen challenged a reporter who asked if dumping the income tax was realistic.

“Is it realistic to talk about eliminating Minnesota personal income tax? I think it’s as realistic as inventing a light bulb or a computer in my phone that used to take up a room this size with mainframes,” he said.

Walz counters that the approach would “decimate” the state’s finances.

“It’s insane. It’s like offering your kids ice cream for three meals,” he said. “Of course, they may say yes. Minnesotans know better than that.”

About half of the tax dollars flowing into the state treasury come from the individual income tax. It produces more than $15 billion per year and will exceed $16 billion before long. The next closest revenue source is the sales tax.

The national average for states is about 39 percent of their revenue coming from income taxes, U.S. Census Bureau statistics show.

In Minnesota, the income tax almost sustains the two biggest budget items by itself — education and health and social service costs.

Walz has pushed for both higher and lower taxes during four years in the governor’s office.

In his first year, he tried to bump up the gas tax and a metro sales tax as part of a transportation proposal. But his plan didn’t get through the Legislature.

In 2021, he proposed higher income taxes for the state’s top earners — those with incomes above $1 million. That didn’t make it either.

During the most recent session, Walz proposed one-time rebate checks. That stalled. He later made a deal with House DFLers and Senate Republicans to cut income taxes and eliminate the tax on Social Security, a plan that also got sidetracked.

He told a FarmFest debate audience this month that his administration “cut taxes more than any time in the last 25 years” and that he agreed to “the largest tax cut in state history.” That last part was a reference to the $4 billion in a proposed tax bill that didn’t ultimately cross the finish line.

Walz said he will continue pushing for a special session agreement to ratify the tax-and-spending framework that was on the table when the Legislature adjourned in May.

He said he’s tried to strike a middle ground on taxes as governor.

“I’ve proposed middle-class tax cuts. I’m not going to propose tax cuts for the wealthiest Minnesotans,” Walz said. “What you see is I’m not an ideologue.”

Changes to Minnesota’s tax code in recent times have been gradual rather than monumental shifts. Reshaping the underpinnings creates winners and losers and can require substantial money to ease the transition.

Jensen said Minnesota hasn’t lowered taxes fast enough and argued its place in the highest top 10 of many national tax rankings makes it unattractive to relocating businesses and squeezes families.

“Is it devastating to Tim Walz?” Jensen asked rhetorically before pivoting to Walz’s use of the governor’s residence and amenities after selling his Mankato home. “I’d say this: If you don’t pay for automobile registrations or auto tabs or gas or your driver or your food or your chef or your property taxes or your utilities, I think it’s pretty easy to be out of touch. And I think that’s what’s frustrating.”

Not all states have income tax

Other states have found it tough to make grand changes as well.

A decade ago, Republicans in Kansas moved to upend that state’s income tax. At the urging of the state’s governor, lawmakers collapsed tax brackets, slashed rates and also lowered business taxes in a move that got national attention.

Sam Brownback, then the Kansas governor, said it would offer a “boost of adrenaline” for the economy. But it didn’t produce a boom that naturally lifted up other kinds of tax revenue.

“They drew down spending. They also did things like cutting aid to local governments, kind of forcing local governments to bear more of the cost of funding state and local government within Kansas,” said Kenneth Kriz, who back then kept close watch on the conversion as a professor of public finance and tax policy at Wichita State. “Deferred maintenance on the roads, a lot of things like that are what we saw.”

About five years later, Kansas lawmakers retreated from the tax experiment and moved back toward some prior policies.

When Jensen talks about moving away from the income tax, he notes Minnesota wouldn’t be alone. Nine states are in that category.

Most of them rely more heavily than Minnesota on sales taxes as a share of their budgets.

Several states without an income tax have natural resources to fall back on — coal, oil and natural gas in places like Alaska, Wyoming and Texas.

“What do we know about those states? Huge extraction royalties. That’s the way they’re paying for it, so families don’t bear the direct burden of the tax system there,” said Kriz, who currently teaches at the University of Illinois in Springfield. “But it’s not something you could do in Minnesota unless you’re gonna strike oil. You know, it’s just not realistic.”

Florida and Nevada count on tourism — people on beach getaways or casino trips — to generate a fair amount of their tax revenue.

New Hampshire and Washington state are also commonly found on lists without income taxes. They still take in some tax money from investment earnings such as dividends or capital gains, although New Hampshire is starting to phase that out too.

Short of an all-out elimination of the income taxes, Jensen draws tax-policy comparisons to neighboring states such as Wisconsin.

“We’re spending at a rate that’s greater than most comparable states,” he said. “We collect 150 percent of personal income tax that Wisconsin does, even though we have less people.”

He’s right that Minnesota takes in considerably more through its individual income tax. Wisconsin’s annual income tax collections are approaching $10 billion, compared with the more than $15 billion and rising in Minnesota.

Steve Warren, a certified public accountant who does tax work for clients in both Minnesota and Wisconsin, said there are many nuances between the two states to consider.

Wisconsin doesn’t tax Social Security benefits while Minnesota still does for many retirees despite efforts to repeal that tax.

Wisconsin’s gas tax at 30.9 cents per gallon is slightly higher than Minnesota’s 28.5 cents.

And while Wisconsin’s sales taxes are lower, Minnesota shoppers have an advantage Wisconsin shoppers don’t.

“In Minnesota, we don’t tax clothing. They do in Wisconsin,” Warren said. “So we actually get people from Wisconsin and other places coming to the Mall of America and over the border to Minnesota to different places here to shop and buy clothes.”

Some of the extra income tax revenue in Minnesota is reflected in higher spending in areas like education. The latest comparative figures from the U.S. Census Bureau show that Minnesota’s government delivers a couple of billion dollars more each year to public schools and picks up roughly two-thirds of the education tab. Wisconsin pays about 55 percent of public school costs and about 40 percent is derived from local taxes. The rest is federally supported.

Warren, of the firm Schechter Dokken Kanter, ran a tax analysis on similarly situated families who live in Stillwater, Minn., and Hudson, Wis. He found that a family with a combined $150,000 income living in Stillwater was positioned to pay less overall in taxes. But Hudson families did better once income hit $250,000, and the gap widened as earnings rose.

In modern times, Minnesota governors and lawmakers have tried to make the system fair and spread the load. But a lot depends on politics.

As the campaign goes on, each side is going to try to paint the best picture they can to support their tax view. The changes they propose are going to have a different impact on people depending on how much they make and what government services they use.