Dolls for tots: Austin woman finds a way to give back 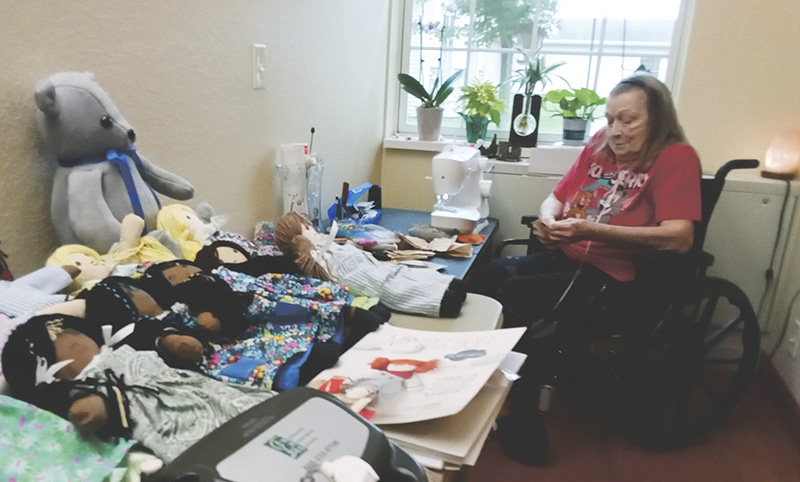 AUSTIN — Good Samaritan Society Comforcare resident Bobbie Cara does not have to worry about boredom on her daily basis, but she is starting to worry about sore hands.

Cara has stayed busy in front of her sewing machine lately as she has used her lifelong love of sewing to occupy her days and raise funds for a good cause. Cara has taken to sewing up dolls, which she is selling to raise funds for Toys for Tots.

“I learned to sew on my mama’s knee,” Cara said. “I bought the book (of doll instructions) years and years ago and I never had time to do it. But I had some fabric left over and I started messing around with it. They turned out pretty good and I figured they’d be great for toys for tots. It gives me something to do.”

Cara has a lengthy background in sewing as she used to make costumes for Las Vegas Showgirls in the 1980s. She went on to run her own sewing shop in Colorado before moving to Austin in 2006.

Mateel Nipp has worked with Cara for a year at Good Samaritan Society and has seen the direct effect of the dolls on Cara’s — and the entire staff’s — mood.

“It’s amazing. It’s nice seeing that she can still do what she loved to do before she was here. She didn’t have to give up anything,” Nipp said. “Seeing her do these dolls for kids is inspiring as I do have a young one myself. I think it’s boosted everyone and it gives her something to do. Seeing her do this for kids makes me want to help kids.”

Nipp enjoys working around Cara, who has a warm sense of humor. She also is impressed with how much care Cara shows on a daily basis.

“Bobbie’s very selfless and she cares more about other people than herself,” Nipp said.

Cara and her late husband were always highly involved with Toys for Tots, and she’s halfway to her goal of 40 dolls. She has to meet that self-imposed deadline by Thanksgiving.